I first met Jeff at the bike shop 3 years ago at indoor winter trainer sessions. He was a quiet tattooed man who worked harder than anyone else but seemed to suffer alone and in silence. Everyone said he worked out too much and pushed himself too hard in training so he never performed well in races. It is now a running joke that Jeff doesn't have a race mode. When we go for rides at Patapsco or Loch Raven, Jeff is constantly waiting up for me. But for some reason when speed actually matters, like in a race, he stops working hard. His recent refrain has been, "I feel too weak. I have Lyme disease." Which is not true (although as Jeff points out, I can't prove it). 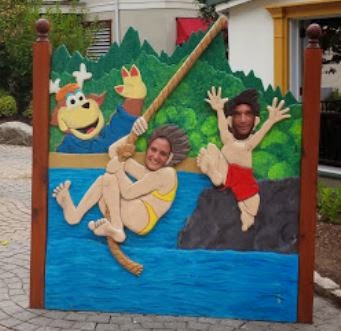 I tried mountain biking for the first time in November 2012 with Jeff. I was atrocious, but I really liked being out in the woods. Even though I got frustrated that I couldn't keep up with anyone, I bought a used mountain bike and kept going out for more. Jeff waited up for me and kept inviting me out for rides. They went sort of like this. Jeff disappeared at his own pace until the trail divided, rest time for him. I bumbled along at my fastest pace until I caught up with Jeff. Then he took off again. No water break for the slow poke.

Jeff told me he wanted to do an Ironman triathlon. He signed up for Mont Tremblant, then convinced me to spend $700 to register for the same race. I made him promise he would drive up with me, since I couldn't afford to get there on my own. He promised. He took 2 swimming lessons before he decided he wasn't a swimmer. He withdrew from the race and got a $150 refund in the mail. He called it a great investment plan because now he had $150 he thought was gone. He still drove all the way to Canada with me so I could race. He kept his word, and we had a run road trip to Quebec. 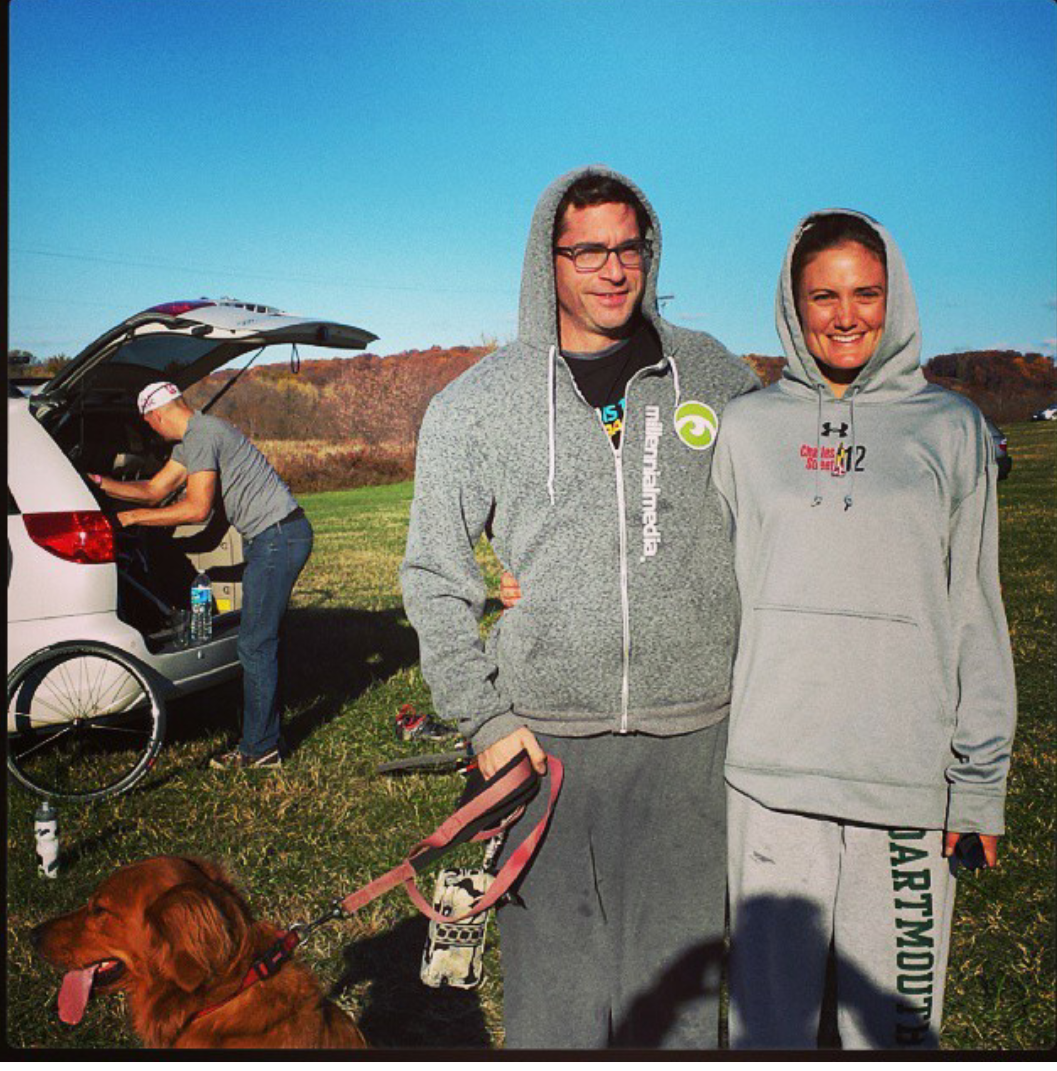 The first mountain bike race I signed up for was 6hrs of Warrior Creek down in North Carolina. Jeff told me it was most fun course ever. So fast and flowy and nontechnical were his exact words. Ok, I thought. Maybe I can race mountain bikes. I registered. Turned out, the course was so "non-technical" that Jeff crashed twice and almost launched himself off a cliff. He quit the race after 2 laps. I finished with 4 laps, but was shaky and beyond exhausted. Never listen to boys when they tell you a course is easy.

Unfortunately, it took me awhile to learn this lesson. I fell for Jeff's persuasive ways again when he told me about Wilderness 101, a 100 mile MTB race through the state forests of Pennsylvania. It's basically all roads or fire roads, he said. Not technical at all. I balked at the registration fee since I had already blown my bank account for Mont Tremblant. Jeff registered for me. So I showed up on the start line for my 3rd MTB race ever. Needless to say, the course changed a bit in 2013 and included a lot of new rocky singletrack trails. I was in tears by aid station 4. I was cursing Jeff. How could he get me into this? I can't handle these rocks. I'm not really a mountain biker. Somehow, I finished that race. And somehow, I was hooked. I couldn't wait to get better and do more. Maybe listening to Jeff and trying to follow him around on a bike wasn't such a bad thing after all.

Last week, we went for a ride around Loch Raven, where I first tried out mountain biking. I've come a long way in 1.5 years. I've also come to really love Jeff. Apparently, he feels the same way about me. About half way through the ride, Jeff pulled off the trail in a grassy section right next to the water and told me he needed a break to eat a GU. I pulled off next to him, thankful that I was now fast enough to be included in the water/snack breaks. Jeff got down on one knee and asked me to marry him. He offered me a beautiful ring. I was beyond surprised, but also beyond happy. I said yes. 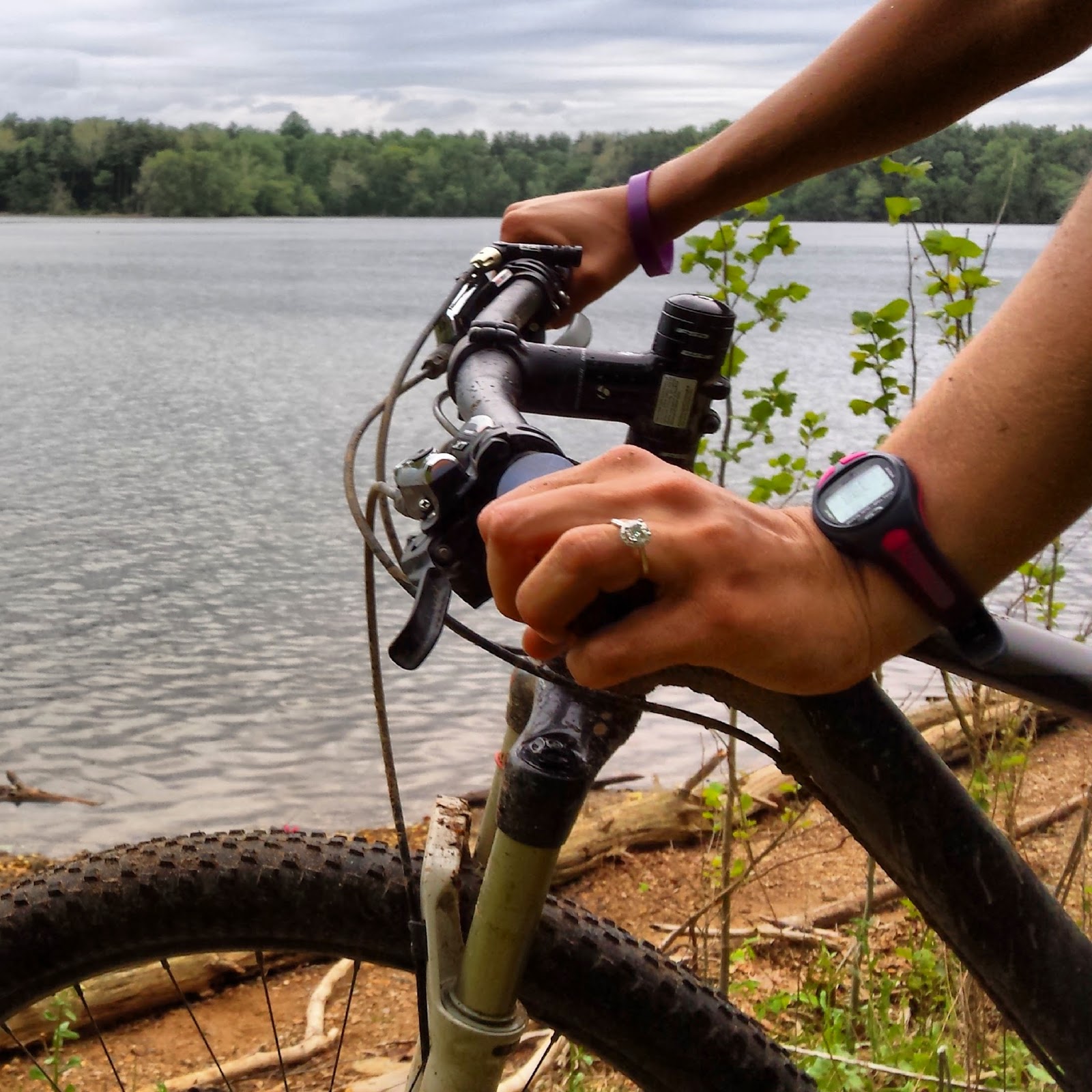 Biking is the bond that brought us together, and I hope there are many more biking adventures in store for us. But I know that if life takes other twists and turns, I can't think of anyone else I would rather have by my side.
Posted by Carla at 9:03 AM