This weekend's race was completely different from all of the races I have done so far this spring. First of all, our team, Joe's Bike Shop, was sponsoring the race, so there was lots to do to help get ready for Saturday. Second, I registered for the XC race instead of the endurance one because doing a shorter race would allow me to volunteer more during the day. And third of all, it downpoured about 30 minutes before the start of our race, which meant that the conditions changed in a flash.

I had a great time helping with race set-up and registration. One of our team members, Bob, has started his own hobby/company called Race Works Gruppetto, which promotes biking and running races. When Bob starts something new, he always goes all out, and for this enterprise, he spared no detail. He has chip timing systems powered by solar panels, adjustable width metal arches for the finish line, computers and printers to post results instantly, a customized database to keep track of race participants, chairs, tables, tents, cones, stakes, tape, signs, podiums and to top it all off, a huge box trailer to store it all in!

Mother's Day Mauler is part of the Patapsco Valley MTB series and takes place in the McKeldin area of Patapsco State Park. The cool thing about this race is the moms race for free! On Friday, Bob, Elizabeth, Matt and I worked from noon till 5pm setting up the timing system, staking out parts of the course that go through grassy field sections, putting up tents, and marking the course with signs. On Saturday morning, I arrived around 7 and spent all morning working registration with Jen. It was really fun hanging out with her and greeting all the racers as they came to pick up their numbers. Jeff spent the morning as a course marshal with Chad and Chris directing racers across the road and stopping traffic as the racers passed.

The course for Mother's Day Mauler is a 4.8 mile loop with about 550ft of climbing per lap. There are 3 main hill climbs and 2 sections I thought were pretty technical - one rocky outcropping that most people ran over because there wasn't a good line through it, and another short but steep rocky uphill climb that I always bobbled on. Here is a great sequence: Jeff attacking the rocky outcropping with so much confidence and then reduced to doing push-ups!

All day, people were talking about how strong both the men's and women's elite fields were, especially for a small local race. For the men, Ethan from our team was racing against Patrick Blair, Dan Wolf, Dan Atkins, and Adam Williams. For the women, a number of local pro's came including Cheryl Sornson, who races for Rare Disease Cycling, Suzie Synder and Marla Streb from the Luna Pro team, and another woman from the Giant Northeast Pro Team. It was a challenging field to be up against!

When I first started warming up for the race, I was really nervous. This was my first XC race this spring - we would only be racing 4 laps of the course. I knew it was going to be a fast race and going fast on singletrack trails is not my strength. I knew that I would lose time on the two rocky sections that I couldn't ride well and because the race was so short, I knew that any little technical error would be hard to make back up. I didn't want to be completely left in the dust. But about half way through my warm-up though, I told myself that I was going to go out there and do the best job I could and as long as I did that, I would be happy at the finish. After I thought about that, I wasn't nervous anymore.

The start of our race was delayed by a heavy rainstorm. It dumped about a 1/2 inch of rain in about 25 minutes. We all tried to stay dry under one of the pavilions while the rain passed. Luckily, the storm did pass, and the park ranger gave us the go ahead to race. We all lined up in the parking lot (it was a mass start with the men's and women's races starting together) and set off at a sprint. I saw Cheryl disappear in front of me charging up the road with the lead men. She is so fast!

Cheryl is a bit of legend. We raced together all last fall during CX (I probably shouldn't say race as it was always Cheryl out in front and the rest of us racing for second place), but I really like her, and it's always cool to get to line up at the start with someone so talented. She has probably done way harder races, but everyone on my team talks about how one year she raced Cohutta 100 and the Michaux in the same weekend. She's won the NUE series for the past 2 years in a row and often finishes the endurance MTB races with times that are fast enough to be on the men's podium. But despite how good she is, she is still really nice and even gave me hug after the race was over. 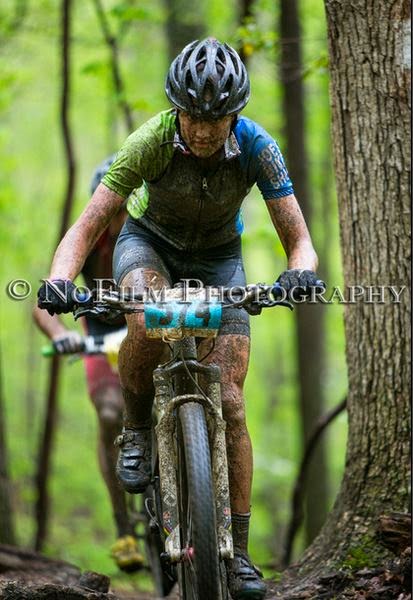 I had a good start and entered the woods in second place. I bombed down the first rocky downhill keeping pace with the guys ahead of me. For the rest of the 1st lap, I just went as fast as possible. I kept thinking "Why isn't Marla shooting past me on the downhills? Why isn't Suzie up there challenging Cheryl? Why isn't Jen coming up behind me on the twisty singletrack?" I made it through the first lap and still no one had passed me. On my second lap, I slid out in the mud just before the creek crossing. I tried to make a sharp turn to avoid going over some tree roots, but the muddy conditions made that turn too difficult. I hit the ground. "Shoot," I thought. "Here is where I am going to get passed." I got up as quickly as I could and just started running my bike across the creek and all the way up the hill. Still no one came by. "Ok. Keep pushing, even harder now. Attack every hill to try to make up some time." By lap 4, I was still riding by myself. I had long lost sight of Cheryl, but I couldn't see anyone behind me either. I stopped questioning why no one was overtaking me and instead focused on making them try to catch me. Just before the last hill climb and singletrack section, I crashed again in the deep, thick, sloppy mud that was the trail by the river. Each lap, I picked a different line through the mud, but I never found a good one. Maybe there wasn't one. Anyway, I crashed and now my handlebars were twisted. "Shoot," I thought for the second time. "I can't believe this is happening so close to the finish." I didn't waste too much time trying to fix my handlebars though. I figured if I fully extended my right arm and fully flexed my left arm, I could keep my front wheel straight. There were a few hairy times riding the last singletrack section like that, but at least I was getting myself to the finish. Luckily, still no one passed me, and I climbed up the last hill with twisted handlebars to finish in second place. I was so surprised. 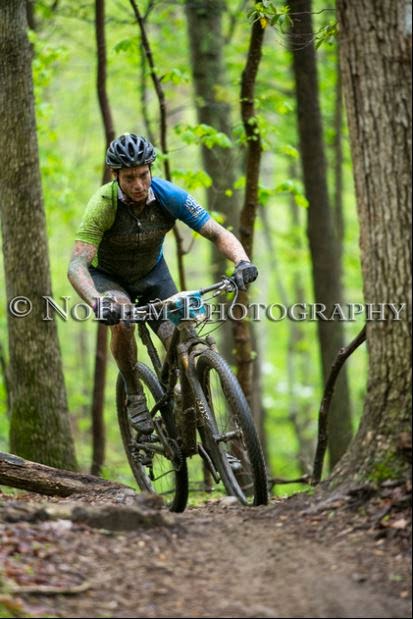 Jeff had a great race too! He started off mellow on the road section at the start trying not to worry about what position he was in entering the woods. "I quickly learned I should have followed the advice I gave Carla: get to the single track as fast as possible. There were some rocky descents that were crowded with people not willing to take risks, so it was crowded and slow. No big deal...the race will spread out. The climbs were steep and on the first laps I felt fresh and hit those pretty hard. I gained a few positions there. The mud was shooting everywhere. Given my glasses were so fogged-up up and wet from the rain, they were in my jersey. I could barely see in certain sections, and there others I was blinking as fast as possible to try to get the dirt out. On the second lap, I started to fade a bit and the race was so spread out I was basically riding by myself. Looking back at the results, it appears that many people DNF'ed. I DNF'ed in a different way - I 'didn't not fall' (see pic above)! Long story short: I felt tired and like I was dragging up all the hills. But in the end I took 1st place in the 40+ category (one advantage to getting old). I was shocked at that result. I think maybe some folks in front of me might bailed or mechanical'ed. It was a great day and I'm happy I raced XC, which I never do...but maybe this was the little confidence builder to trying some more XC races. Greenbrier? Oh... and I got Carla'ed. Gotta work on that."

At the finish, we were so muddy. We washed off what we could by jumping in the river, but there was still a gritty pile of dirt left in the bottom of the shower later that evening! 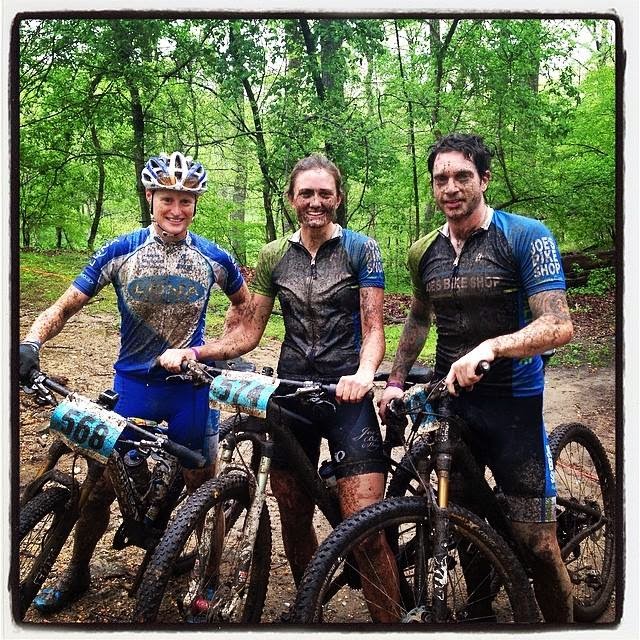