9hrs of Cranky Monkey takes place at Rocky Gap State Park in Flinestone, MD, a little over 2hrs from Baltimore. It is hosted by EX2 Adventures, who always do an awesome job putting on races. With any EX2 race, you can expect great organization and volunteer support, well-marked courses, a free tee-shirt, electronic timing with lap times available for printing on-site, post-race pizza deliveries, and pint glasses for the podiums!

The 2014 course at Rocky Gap was about 8.2 miles. It started off with a 1 mile road climb that ended at a set of stairs, which you had to run up cx-style. After the stairs, we entered a 2 mile section of rocky and rooty singletrack with twisty turns along by the lake. Then after a short time on the road, we climbed up into the mountain singletrack section, which basically consists of a long rocky climb followed by a steep descent with lots of loose rocks. I have a much better understanding of the park name after racing there. The final couple of miles are pretty flat, fast, smooth singletrack power sections. I felt like I could fly through that part of the course. The conditions on Saturday were muddy and wet. On one of the downhill sections, there was a full flowing river down the trail that we descended through. Luckily though, there were guys from Wicked Wash at the race all day cleaning bikes so the mud build-up never got too unmanageable.

Joe's Bike Shop Racing Team was well represented this weekend. Chris and Keith raced in the men's solo category, Jeff and I raced in the co-ed duo category as did Kathleen and her teammate, Tom from the Wicked Wash team, and Kristin raced as part of a co-ed trio team. 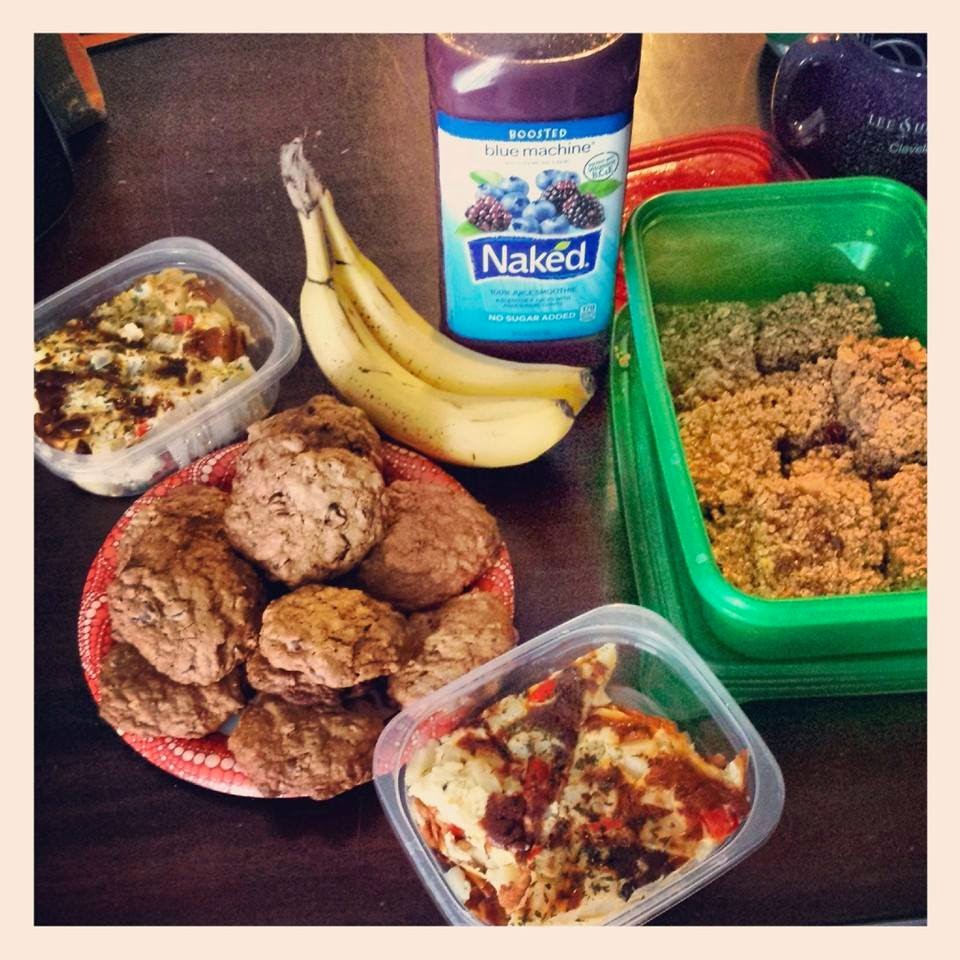 Since I have officially finished with medical school, I had some extra time to prepare for this weekend's race. Instead of relying on GU's, slim jims and sugary snacks on race day, I made some recipes from the Skratch Labs cookbook, and fueled my race day with real food. I made apple-quinoa bars, potato and red pepper frittata slices, whole wheat chocolate chip and hemp seed cookies, and savory bread pudding bars. Along with bananas and Naked juice drinks, I was happy I didn't have to eat a single energy labs product.

However, while my nutrition was improved from last week, my clothing choice was not. It was much colder than I expected it to be and everyone who was relaying got really cold between laps due to low temperatures, windy and rainy conditions, and sitting around in wet, muddy clothes.

The race started at 10am and the cut-off time for the last lap was at 6:30pm. I did the first lap for our team because Jeff didn't want to run the Le Mans-style start. So I got to deal with the beginning of the race congestion. It was so fun doing hot laps and pushing as hard as I could each time I went out since I knew I would get a 40 min break before I biked again. I felt great throughout the day. While my times up the hills probably got slower as the day progressed and my legs tired, my confidence in riding the rocky singletrack sections improved drastically. Each lap, I felt smoother through the rocks and turns, and I learned which lines to take through the rocky and muddy descents so by the end, I didn't have to touch my brakes. The race really helped build my confidence biking fast through rocks.

For Jeff, he started out really strong for his first 2 laps. Lap 3 = dark place. On his forth lap, Jeff managed to get lost. It was his forth time out on a exceptionally well marked course, so that takes some skills! Jeff took a right hand turn up one of the climbs too early and ended up in someone's campsite. Luckily, he found a cut-off back down to the road and made the correct right hand turn a little farther up. He had to pass the same people he had already passed once. "Hello again. Hello again." His fifth lap felt great.

I finished my 6th lap around 5:46. We had about a 20 minute lead on the 2nd place team at that point. Jeff said I wouldn't have to go out again if I didn't want to. I told him of course I wanted to bike more, which meant he had to push through his last lap to make the 6:30 cutoff time. I wasn't about to let Jeff get off with an easy, cruising last lap, which is what he wanted! At 6:28 with 2 minutes to spare, Jeff came rolling through the transition area, and I set off on my last lap of the day. Since I didn't let Jeff have an easy last lap, I wasn't going to let myself have one either. I pushed through the entire course as hard as I could. At the start of the lap, the evening sun was shining through the trees and reflecting off the lake. I was so happy to be out in the woods on my bike. There was no where else in the world I would have rather been at that moment. At the end of my lap, the sun was still shining, but it started downpouring! I didn't care at all. I was already covered in mud from head to toe. I was wet, tired, happy and powering through the last singletrack section with a huge smile on my face. As I came into the finish, a rainbow appeared overhead. Some days are frustrating on the bike, some days I want to quit training, but days like Saturday make all the hard work and disappointments worthwhile. It doesn't get much better than finishing an endurance relay in 1st place under a rainbow. 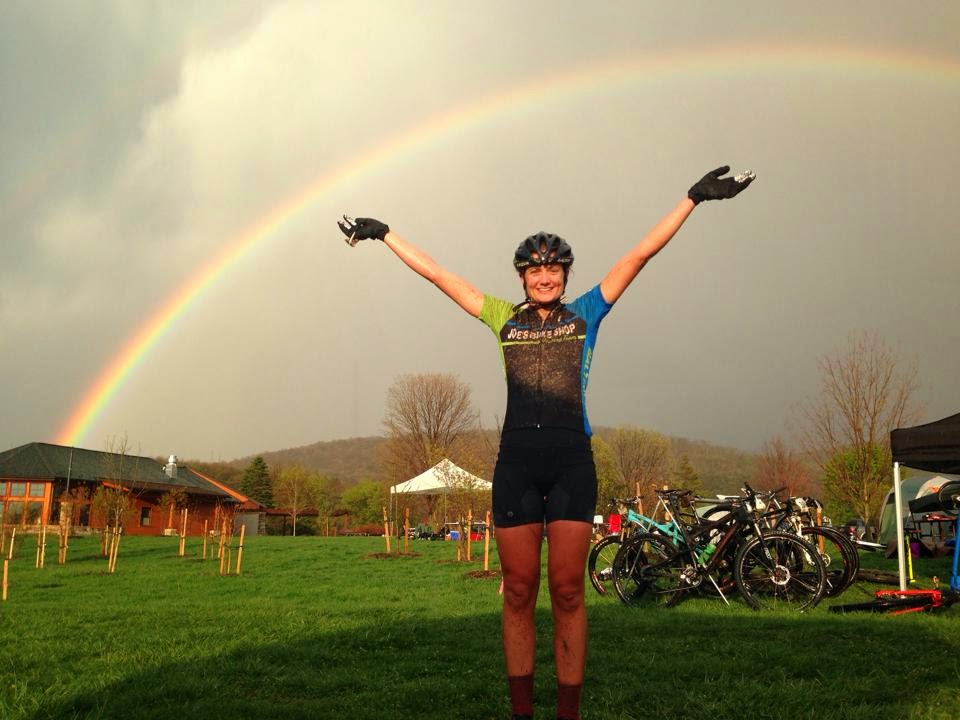 We were the only co-ed duo team to do 13 laps. My last lap time was 42:49, and I actually beat Jeff's last lap time of 42:57! That never happens in a singletrack mountain bike race and will probably never happen again so I figured I should document it here.

Everyone else on Joe's did really well too. Chris is a beast and took 3rd place in the solo male category coming off of Cohutta 100 last weekend. Kathleen and Tom took 4th, and Kristin and her team got 3rd. The 3rd place finishers probably got the best prizes of the day: in addition to pint glasses, they got a Park Tool pizza cutter and spork!