What a great weekend and race! Mohican 100 was the second NUE race that Jeff and I signed up for this year. It takes place in Loudonville, Ohio, about 6.5 hours west of Baltimore. The race starts on the main street of Loudonville and finishes at Mohican Adventures campground where a lot of race participants camp out, including us. Jeff and I headed down on Friday morning and arrived around 3pm. We camped at a wooded, mosquitoey site with our teammate Chris and one of his friends, Matt, who flew in from Boston for the race. After setting up our tents and watching Matt expertly reassemble his full suspension MTB, we headed to race check-in and then out on the trails for a quick spin to stretch our legs and see what the singletrack trails looked like. The trails were really fun: they were dry, fast, and twisty with enough technical roots and rocks to keep Jeff and Chris happy and me constantly on my toes. Riding dry trails is somewhat of a novelty for us this spring because we have had so much rain in Baltimore. We were having so much fun on our pre-ride we joked we should just keep riding into the evening and forget about the race the next day!

We did eventually turn back and hit up Trail's End restaurant for our pre-race dinner of pizza, burgers and chicken wraps. We also invested in some fire wood and bug spray, which worked miracles back at the campsite. At some point in the middle of the night, Jeff woke me up. "Do you here that?" He sounded very concerned. "There is a wild animal right outside our tent." I listened groggily, but didn't hear anything, so I rolled over and went back to sleep. Matt was also awake though. He and Jeff got out of the tents to investigate.

Matt: I heard that too. It was definitely attacking something.
Jeff: Yeah, that was scary. What was it? I think I can still hear it breathing on the hill behind our tents.
Matt: I know. Is there any food out? Should we get rid of the trash here?
Jeff: I don't know. I think you can hang it from a tree.
Matt: Do you think it was a fox? What does a fox sound like?

I don't know guys, but I'm pretty sure that's a song.

On race morning, we were up at 5. We left our campsite to cycle to start line just as the sun was peeking through the trees. It promised to be a beautiful day. There were 600 racers lined up on main street as both the 100k and 100 mile racers started together. My goal for the start was to stay upright. I did not want to get caught up in a crash on the road. That happened to 2 riders last year: http://dirtwire.tv/2013/06/start-crash-mohican-100/

The start was fast because there was a $200 prime for the first rider to reach the top of the first big hill climb on the road. I was well back in the pack, but felt good on the road. There were a few bottlenecks once we hit the trails but generally the line of cyclists in front of me moved along well.

The first 30 miles of the race was all singletrack trails. I rode them decently. I went over my handlebars on one steep downhill section but both body and bike were fine so I just kept right on going. I'm not very smooth or flowy through the trails. This is how things usually go for me: pedal, pedal, pedal, oooo tricky corner, brake, use lots of energy trying to get over some roots...ok, now remember to stay relaxed....omg rocks, I'm going to die, brake, pedal, pedal, pedal to catch up back up. It's very draining. Chris captured some of the trails on his GoPro:


After 30 miles, we exited the trails onto a road. I was able to eat, drink, and generally relax so much more. Now I felt like I was racing! I think maybe this is a sign I should concentrate more on road racing next year.

I stopped at aid station 3 for some food and refilled my camel pack. My Garmin was reading about 48 miles and just under 5 hours. This was going to be a long race. I mentally prepared myself for another 5 hours on the bike.

Luckily, the second half of the course was a lot faster. It was a mix of paved and fire roads with some steep but short climbs and a 10 mile section of relatively flat rail trail. I pulled into aid station 4 at mile 72 and downed a Red Bull and some watermelon. Jeff was getting ready to go just as I was pulling in. I said hello and watched him disappear up the hill in front of me. My legs were feeling starting to feel pretty tired. 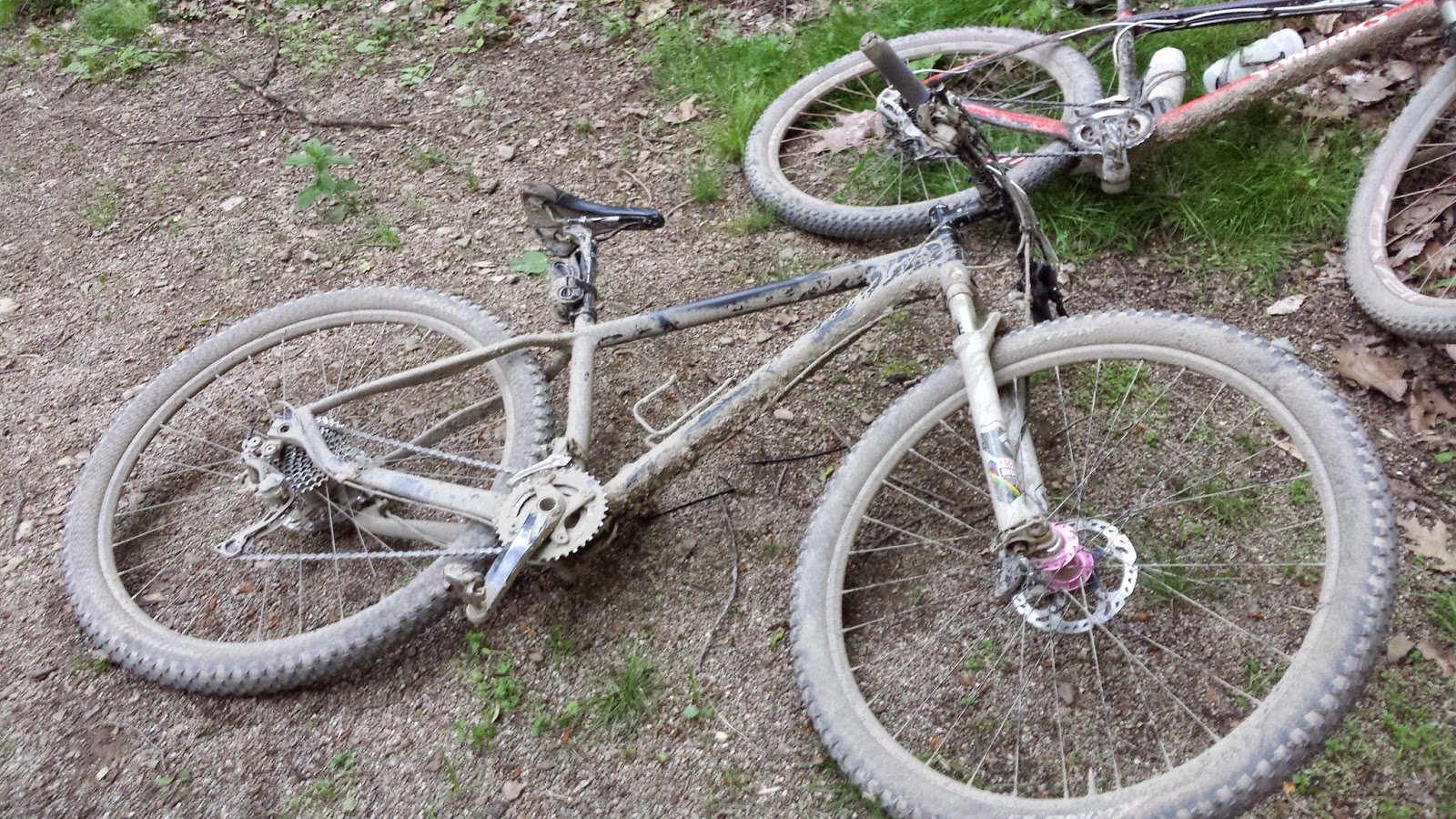 Somewhere along the trails between aid station 4 and 5, I hit a mud bog. My front tire sank in and came to a complete stop. I couldn't unclip in time and fell over sideways into the mud. Gross. I sloshed my way out and cycled along the road by a river. There were families floating down on yellow rafts. I wanted nothing more than to jump into that river and join them. I daydreamed about floating downstream to the finish.

I came to the last aid station which was supposed to be at mile 92. The last few miles were all singletrack trails. If anyone had been watching me ride those trails, they would have questioned whether I had ever ridden a bike before. If there was a root or rock in my way, I got off my bike and just walked over it. I pushed my bike up some of the hills and even walked some of the rocky downhills. I was mentally finished with riding in the woods. After about a mile into the singletrack, a rider passed me.

Rider: Get on my wheel. We can still break 9hrs.
Me: You have to be joking. We have miles of singletrack left.
Rider: Not true. There are only 2-3 more miles left.
Me: Seriously? That is best news I've heard all day.

I didn't break 9 hrs, but I finished that race and actually came in 2nd place despite all of the singletrack riding. I was beyond exhausted, but happy to have my finishers growler in hand. It was only later in the evening, after 2 lbs of chicken breast, refried beans, pasta salad, oatmeal cookies, 2 slices of pizza and 2 cups of beer, that I finally started to feel better. The next day, I was still pounding calories. A McGriddle from McDonalds, a full breakfast of eggs, sausage and grits from Cracker Barrel, beef jerky from a gas station rest stop - I think I ate more meat that day than I have in a very long time!

Never having ridden this course before, I again should have listened to the advice "push on the road to get into the singletrack with a good group." Our pre-ride on Friday at a peppy-fun pace was a hair faster than the pace of the giant single-file line of bikers. Any rider's bobble would slow the long conga-line down. But maybe it was a blessing in disguise. As Carla described, there was LOTS of single track in the first 45-50 miles. It took me about 5 hours to make it to mile 50. A finishing time of 10 hours did not sit well in my mind.

But then I hit the flat rail-trail, road and double track sections and really picked up the pace. You could see the miles ticking away on the GPS. I was very happy about this.

The conservative pace upfront left me with legs for the last 40+ miles of road, ups and double track. I really felt great ascending. Given how I had been feeling this season, I needed this confidence boost. If you follow Carla's musings, you know that I think I have Lyme disease or some sort of illness, but it is more likely a case of the lazies and beers-ies. But on Saturday, I finally found my race mode.

The inner thigh cramps and hamstring cramps came around mile 80, but I have learned that if I just keep pedals and ignore them, then go away in a few minutes. They did.

Back in the final single track I did some quick math, and I knew I could break 9 hours if I kept pushing. So I was on it, as hard as my legs could push me. There were lots of 100k riders finishing up on this same stretch. Most of them heard me coming, or heard my "rider back" warning and cleared away. However, there was one tricky rock spot on an uphill corner. There were 3 men standing there with bikes... there was room for me to squeeze between them, but not with a good line choice. Of course I bobbled, could not unclip, and tipped over slow-motion style directly onto one of them. It was hugely embarrassing, and lying there I could not muster the energy to get up. "Could you help me stand up?" My beet-red face uttered "I'm so sorry" about 4 times before continuing on. Funny how picking myself up off the ground was impossible, but back on the bike I felt good again. Back to the goal: beat 9 hours.

I did it. 8:52:33. 40th place. I could not be happier with that. At the finish, race volunteers immediately stop you and say "good job! Growler or Pint glass?" I asked if I could come back to get them, because if I stopped, the legs would surely lock up. After a quick spin around the campsite to move the good blood into place, I picked up the growler. I saw my teammate Chris Lane, and he said he had just come in a few minutes before me (8:46:49). Knowing how strong Lane is, I was super psyched to finish near him. Matt also did well too, crushing all of us and finishing in 8:18:24 despite getting lost and riding some extra miles.


Like Carla wrote: amazing post-race dinner, great course, amazing weather, great camping and love hanging out with Lane and Williams. This is the most fun of the 100's. Most FUN (by far, not the most challenging). Now, on to more training for PTAP100: the hardest MTB race in the universe.
Posted by Carla at 10:28 AM