True Grit 100 was the next race on our calendar this year. This race takes place in St. George, Utah. Jeff and I were both excited for more desert riding and to escape the dreary cold place that Roanoke has been this winter.

Jeff has been looking for alternatives to our hard case bike boxes for traveling because every time we pack up bikes, we spend about half an hour playing Tetris and trying to find the right alignment of wheels, frame, and fork so that the boxes will close properly. We were able to get a really great deal on a couple of Pika bags from a friend and it made packing up the bikes so much easier. They are rather heavy to carry around the airport but I guess unless you are will to spend $500 on an evoc bag, you can’t have it all!


We flew into Las Vegas and then drove to St. George. We stayed at an air bnb right next to the start of Zen trail. One of the best parts about this race was that a whole contingent of Joe’s racers came out from Baltimore and it was awesome to see everyone from the team. There was also a great group of Roanoke riders too, including Lauren, and Ray who were also staying with us. We met up on Friday morning and pre-rode Barrel Ride and Zen trails and scoped out lines on the upper section of Bear-Claw Poppy. 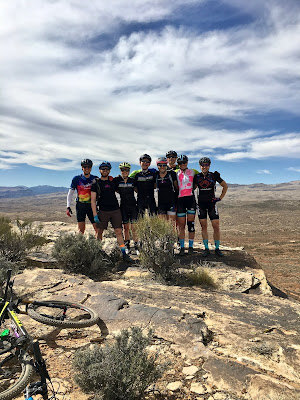 The riding in St. George is unlike any type of riding I have ever done before. It is very technical, full body work-out trying to climb up and over rocks and then surviving steep rock drops on the descent. The sandstone rock is incredibly grippy and sometimes you just have to trust your wheels are going to stick when it seems impossible that they will. I think Lauren said it best: “in the east coast, we always try to find the line between the rocks but out here, you have to find the best line over the rocks.” It is definitely a different way of seeing the landscape. 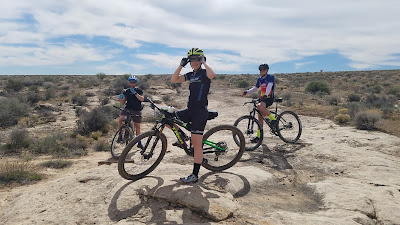 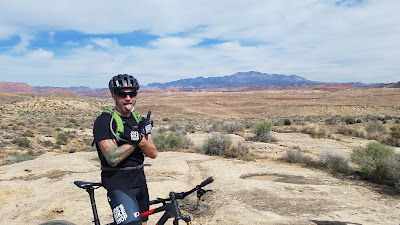 I am grateful to Jeff, Lauren and the rest of my Joe’s teammates for showing me the lines on the trail sections that we pre-rode. It made racing the next day a lot easier, although I was still pretty nervous about some of the trail sections. I really didn’t want to fall off and injure my knee again.

Race morning was a bit chilly, but it warmed up quickly after the start. We started on a series of dirt road climbs, descents down into washes, and then made our way onto singletrack trails. There was an incredibly strong field of female riders, which was awesome to see. I contemplated the fact that I might not even make the podium given how technical the riding was, but I was determined to go out and give it my best. 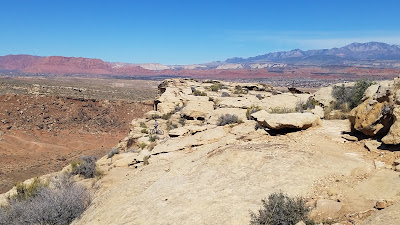 Larissa Conners had a blazing fast start and immediately gapped everyone else in the field. I had a decent start and made it to the start of Zen trail in second place. Sparky Spear Mois came flying by me on the Zen descent and there was nothing I could do to keep up with her. Then we came to the most fun section of the course, Bear-Claw Poppy Trail. It is a fun fast downhill with zigzagging trails all weaving in and out and joining back up together. You can pick any line down it and have a blast. After that section, you start a long and gradual climb back up to the ridgeline on Stucki Springs Trail. At this point, Chase Edwards came charging past, and I decided I should probably try to stick her wheel if I wanted any hope of staying in the race. We passed Sparky but then she later caught back up and passed us again on the technical Barrel Rolls Trail, which is the last technical trail section that ends the 1st lap.

I was actually pretty excited with how I was riding. At the end of lap one, I was right with Chase and we could see Sparky in front of us. I was right in the mix of things on trails that were really technical and usually would have me struggling at the back. Bring it on rocks!

I decided to put in a push and catch back up to Sparky. We worked our way back up the initial climbs, back through barrel roll, and started back up Zen. I didn’t have enough of a gap on Sparky to hold her off on Zen trail and she came by me again. She is incredibly fast on the technical sections and downhills! I pretty much rode my own race to the finish after that. I was much more relaxed and comfortable on the trails on the 2nd lap, pushed the climbs, had a blast down Bear-Claw Poppy and made it through Barrel Roll again. I knew Chase would be hammering behind me. Once you finish the last single track, it is a 1 mile descent and road sprint to the finish which felt amazing crossing the line. I was really happy with 3rd place. I finished in 8:02, about 3 minutes behind Sparky in 2nd.

I had a ton of fun at True Grit. I think it has the most technical riding of all the NUE races I have ever done, the desert views are beautiful and it is just so different from anything on the east coast. Really hope to be back again next year! Much thanks to ESI grip, Maxxis tires, JBSRT, and Huma Gel for making this possible!