My 2018 season started off at 24 Hours of Old Pueblo, which is part of the Epic Rides series and takes place just north of Tucson, AZ in the Sonoran Desert.

We arrived in Tucson on Thursday morning, lugging a bunch of crap through the airport: bikes, lights, battery packs, kit changes, all the camping stuff, spare bike parts and tires. Way more stuff than we usually pack for a 100 mile race trip. By the time we arrived, I had already pretty much been awake for 24 hrs. I spent most of Wednesday morning packing, worked an ED shift from 4pm-1am, then we left Roanoke at 1:30 am to drive to RDU, arrived at 3:30 am, flight left at 5 am. Arrived in Tucson 8 hours later.

We drove out to race venue to check it out. It was raining, a very fine almost misty rain but the kind that soaks you right away. The 24-hour village is located at the end of an 11-mile dirt access road that was full of potholes and mud and took about 40 minutes to navigate down. The road was super muddy and any bikes that were on racks on the outside of cars were fully coated in thick gloppy mud by the time they arrived at the race village.

The entire race village was a wet muddy mess of a cluster. Cars, tents, pop ups, RVs were all jammed in next to each other with muddy roads snaking through the camp site. Once you learned how the village was set up, it seemed a bit less chaotic but it was daunting at first to find a place to park and camp. Somehow, Jeff and I found the perfect place for our tent on a flat section right next to the course. We put up the tent and then decided to find a dry and less muddy hotel for the night which would also afford us a dry and less muddy place to build bikes and a solid night’s sleep as I definitely needed to play catch up.

The next day was cloudy and rainy. We spent most of the day getting supplies for the race. It was hard know how much food to buy and what we would feel like eating at 3am after 15 hours of riding a bike. For future reference, huma gels, brownie bites, cold pizza, PB&J sandwiches, watermelon, Dr. Pepper and monster energy drinks pretty much did the trick. We spent Friday night at the campsite, ate dinner with Chris Lane and some of his friends who were competing on teams. It was fun catching up and hanging out by the campfire. 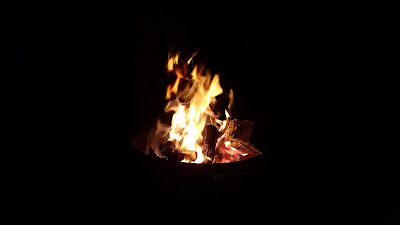 Saturday at noon it was time to race. It was a Le Mans-style start, which means we start at the top of a hill and have to run down to our bikes, which are almost impossible to find in the stampede of people running, spectators cheering and bikes strewn out along the dirt road, piled 3-4 layers deep.

The course is really fun, flowy and fast. It starts on a series of steep dirt road climbs and descents known as “the bitches.” Before the race, the race director made a big deal about how dangerous the descents on the bitches were and how people break collar bones or taco wheels every year. I was a little nervous the first time through, but there is nothing at all dangerous or hard about the descents. The more speed you get on the downhills, the less you have to pedal on the uphills! The more challenging part of the course was navigating through the cholla fields. Chollas are also called jumping cacti because if you even just lightly brush up against them, the arms will detach from the plant and stick to your arms or legs. If you try to brush them off, the spines will splinter into tiny spines that can be almost surgical to remove. So, if you get a cactus arm on you, you either have to use a comb (provided in your race bag) or have a friend use 2 sticks to whisk it off your body. I definitely had to stop a few times to de-cholla myself.

There were a few other stand out parts of the course: about half through there is a whisky tree with bottles of whiskey hanging from it or people offering whiskey hand-ups. On the last section of the course, there is a steady climb up to the top of a mesa and then a really fun descent all the way back into camp and into the finish line. This is capped off with a pretty steep but fun rock drop.

I rode 3 laps before stopping to get food and change out camel packs. Jeff and I worked out a system where I would leave my empty camel pack on the left side of the tent and if Jeff saw it there, he would know it would need filling up and would move it to the right side of the tent. Jeff was racing too, but was also planning to take some long breaks and was able to help me out a bit with camel pack refills and lights, which was super helpful. 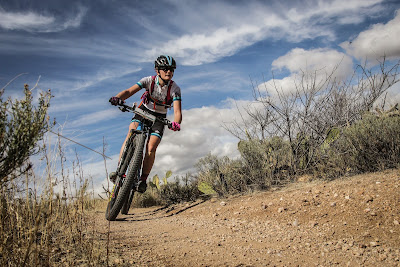 After 5 laps, it was time to mount lights, and I rode off into the desert sunset and mentally prepared myself for 12+ hours of riding in the darkness.

I didn’t really have any specific race plan, I didn’t really know how to pace myself, and I didn’t really know how my body would do in a 24 hour race. I tried to just focus on relaxing, being as efficient as possible with pedal strokes, not pushing too hard on the uphills because I knew that while they seemed easy now, after 18 or 23 hours, they would seem like mountains. At some point in the night, I starting stopping at the tent every lap to eat, change out lights and mainly to see Jeff and talk to him for a second before heading out again into the darkness. My wrists started hurting. At 3am, I started feeling like I was falling asleep on my bike and would jerk awake just before my bike went off trail into a cholla tree. I chugged some more monster energy drink at the next pit stop which definitely helped. At some point in the night, my garmin was reading 160 miles. I remember thinking to myself that I was probably going to ride 100 or more miles before the race was over, and I was having a hard time wrapping my brain around that. I decided to eat a lot more pizza.

At last, sunrise. It was a beautiful sunrise over the desert, the rocks, the cacti, the red and yellow cliffs all came into view again with the warmth of the sun. It was light out, and it was easier to stay awake. Jeff was motivated to ride again, and we rode the last 3 laps, ~48 miles, together. 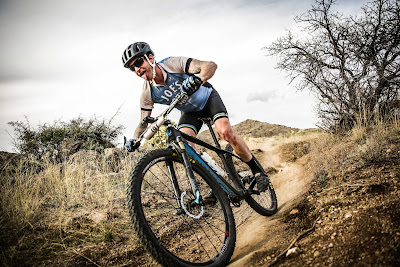 I finished my 17th lap with about 15 minutes to spare. The race rules are that you have to cross the finish line after 12 pm or your race doesn’t count. I could either go out for an 18th lap or sit at the campsite for 15 minutes before riding the short section of trail down to the finish. I was solidly in 2nd place. Kaitlyn Boyle was in 1st and was already out for her 18th lap and I had no way to catch her, and Ashley Carelock was in 3rd place and out on her 16th lap. I had ridden ~272 miles which was farther than I had ever ridden before and I had completed my first 24 hour race without stopping. 4 weeks before this race, I was still in cx mode, and I had been a bit worried my endurance fitness wasn’t were it needed to be, so I was really really happy with how I had ridden this race. I might have started out a bit too fast, but overall, it was solid 1st 24 hour attempt for me. I decided that an extra 16 miles was not going to be make me any happier than I was right then. I sat down in a chair and waited for noon.

My hands and wrists were so swollen and numb after the race, even now the tips of my right 3 fingers are still not back to normal. I think I gave myself semi-permanent carpal tunnel syndrome. Overall, it was an incredible experience. The race was really well organized, everyone we met there was nice and encouraging. People out on the trails were respectful and everyone seemed to understand that we were all there for the same purpose to race hard and to have a good time. The people who camped next to us let us use their generator power to charge batteries, which was super helpful. I wish we had scheduled more time off work to relax a bit in Tucson after the race, maybe check out some of the other areas to ride there, visit Sedona, but that will have to be a different time :-)