What to do with 7 bikes (plus or minus 2) and 1 golden retriever in a very small condo...

The answer to this question for the past 10 months has been to prop bikes against every wall and hallway, pick your way gingerly around corners and open doors carefully. It has not been so bad during the day but the early morning rush to work makes things more challenging. When I am stumbling sideways out of bed at 4:45am, it only takes one false move to bruise my shin and send the entire pile of propped up bikes crashing down. Because literally, there are 2 bikes leaning against one side of the bed, the handlebars inches from my face when I am sleeping.

A rational person might ask why do we have so many bikes? A cyclist would ask why are we not following Rule #12 and in the process of acquiring more? (Rule #12 of cycling etiquette states that the correct number of bikes to own is n+1).

The answer to the first question is that I am dating a cyclist who needs a bike for every condition possible. There is a road bike for pavement, a full-suspension bike for rocky trails, a hardtail for nontechnical climbs, a fat tire bike for riding in the snow, a single speed mountain bike for building strength, a cross bike for racing cyclocross, and a baby blue mountain bike used mainly now for commuting. The plus or minus 2 bikes happen to be mine because I also love to ride and will sometimes store a bike or two at the condo.

The answer to the second question is that Jeff is actually in the process of acquiring more bikes. He has his eye on a new Trek Project One 6-series road bike and a new Trek Boone 9 disc cross bike. But we can talk about new bikes later.

The real question is what to do with so many bikes and so little space. Jeff has been talking for months about putting up hooks or racks to store the bikes, but the action so far has been a bit lacking. So I made a bet with him to up the stakes. I bet that he wouldn't have them stored properly by the end of the week. He said he would. If I won, he owed me a massage. If he won, I had to buy him fancy caramels. But really, it was a win-win scenario for me. If he got it done, I wouldn't have to wake up with bikes in my face.

Normally, this would not be a hard thing to accomplish. It's a trip to the hardware store and an hour of putting up wood and hooks. But the thing is, most weekends we destroy ourselves on bikes riding anywhere from 4-8 hours/day. So by the time we get home, it's eat, shower and lie on the couch until we fall asleep and repeat on Sunday. This doesn't exactly make it easy to get other things done.

The results? Jeff won today! And the storage solution looks awesome. He had some help from an ophthalmologist who LASIK-ed his eyes recently, requiring him to take the weekend off from biking while his eyes heal. I think that moral of this story is that if there is something that needs to get done, get a doctor's order that forbids exercise. And bet with fancy caramels. 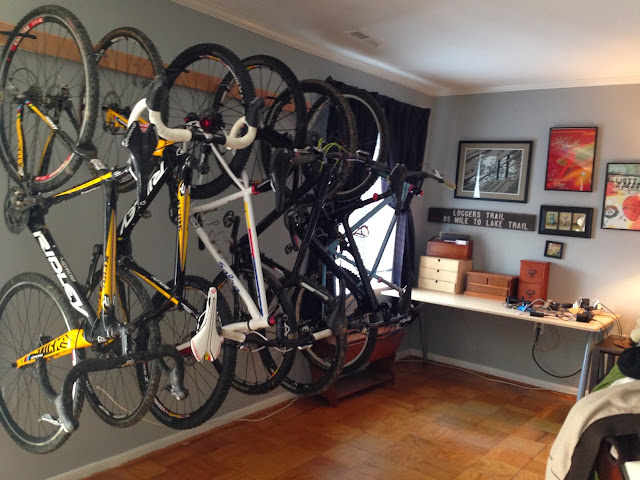