Superbowl Sunday at a Belgian Bar?

That's right. It's a little known fact in the US, but each year a huge party takes place on Superbowl Sunday hours before the football starts. Crowds don heavy jackets and boots, throw back beer and shots from sun-up till sun-down, and roar and heckle as the competitors battle through mud, up flyovers and over barriers and bodies as they compete for best in the world. It's the cyclocross world championships.

For the noncyclists, cyclocross is comparable to a steeplechase race on bikes. Race courses are mainly on grass but there are often road and woods sections involved. There are obstacles you must run over or bunnyhop on your bike, steep climbs, muddy off-camber turns that are sometimes too difficult to ride, and crowds that try to pass you cups of beer as you pass (called handoffs). The women race for 45 minutes and the men for 1 hour. The goal is to finish the most laps possible in that time period. The key to being good: be Belgian.

In the US, cyclocross is a grassroots sport. Local bike shops sponsor races and there are categories for everyone to take part. The courses are designed to enable pros down to cat 4 beginner riders to race on the same course. In Europe and in Belgium in particular, the racing is out of control. Not that I've been, but I've heard stories and watched the videos. In Europe, only the pros race and the courses are designed to challenge the best riders in the world with the steepest descents, sharpest corners and slickest conditions. It always seems to be raining in Belgium which turns every course into a mud pit and adds to the fun and unpredictability of each race.This year, although the world championships were in the Netherlands, the course conditions lived up to par.

So now, back to the bar. In the Netherlands, the racing was aired in prime time, but not so here. To watch the championships, a group of about 30-40 Baltimore cyclists congregated in front of a small TV screen and watched a blurry, choppy replay of the action with frequent pauses when the internet signal cut out. But the beer was good and despite the lack of big screen HD, the racing was incredible. In the women's field, Marianne Voss (NED), who won the world championship last year, had the lead from the start and kept walking away from the field. She finished over a minute ahead of second place. Talk about dominance. And she's only 26. Helen Wyman from Great Britain finished third. She comes to Baltimore every year and wins the Charm City Cross race easily. She holds a clinic for riders and actually taught me how to jump onto my bike without double hopping. It was pretty cool to see someone I've met on the podium.

In the men's race, it came down to a 2 man battle between Sven Nys (BEL), the defending champion, and Zdeněk Štybar (CZE), who primarily races on the road now but won the cross championship back in 2010 and 2011. If you want to know who's who in men's pro cross, watch some episodes of SVENNESS here: http://www.cxhairs.com/tag/svenness/

From what I could tell on the grainy TV screen, first it was Stybar leading. Then he slid down around a muddy corner and Nys hopped over him to take the lead. Then Nys slid out around a tight 180 degree turn and Stybar was able to catch up. Then in the last lap, Stybar put down a really impressive attack. He opened up a gap that Nys couldn't close and won his third championship.

This year, the Belgian's didn't take home a world championship. So I guess I should revise my previous statement. If you want to be good at cyclocross, you don't have to be Belgian. You just have to race there. 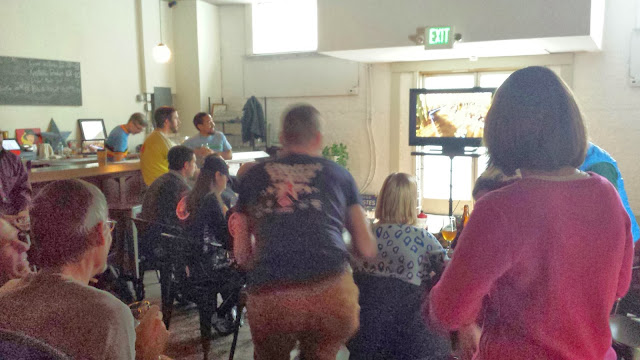