I don't have a bike rack for my car. I own a little Hyundai Accent hatchback. When I put the seats down in the back of the car, I can get my entire mountain bike in without taking the wheel off. If I need to take 2 bikes to races, I just stack them with a yoga mat between to keep the pedals and derailleurs from getting tangled. I think it's a pretty good solution, but lots of people make fun of me for not having a roof rack and for shoving my bikes into the back of the car. 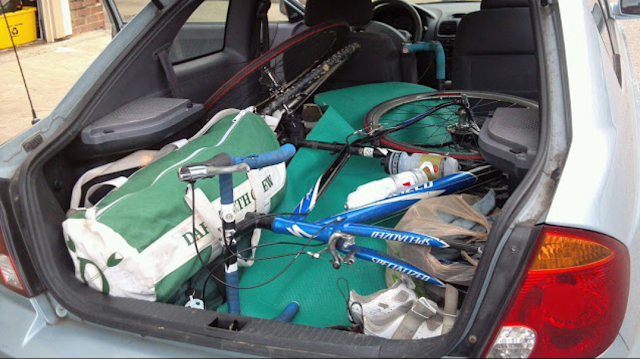 Jeff has a Subaru Outback. It is outfitted with a roof rack for 3 bikes and a hitch mounted bike rack for 4 bikes. Sometimes when we are traveling to races, he is fully loaded with bikes and looks pretty pro driving down the highway. He also looks pretty pro when bikes are dangling from the top of his car by only a rear wheel. And sometimes, low lying roofs really get him and bikes end up not dangling, but crashing to the pavement. 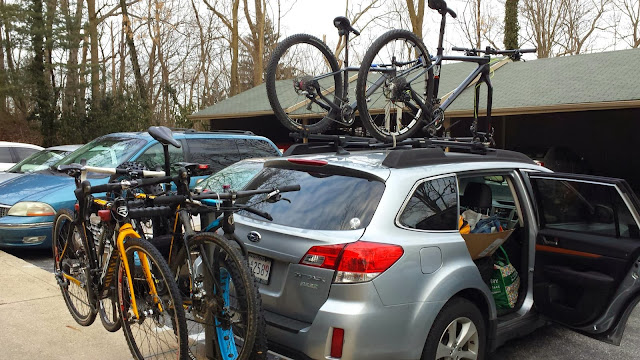 Recently, there have been 2 such mishaps with bikes on the car. The first happened on New Years Eve. Jeff was bringing his BRAND NEW Trek Project One Superfly 100 full suspension bike home from the shop. He had the bike nicely mounted on his roof rack. He drove down the road, turned right into his condo complex. Everything was fine. Then he decided it would be a good idea to park in his car port, which happens to have a low lying roof. (Hold your breath now, this is actually is going to happen). The sound of new carbon fiber hitting a wood roof and then crashing to the pavement is nauseating at best, a heart attack at worst. The bike had been completely sheared off his roof rack. Pause a moment to contemplate what just happened, then bring yourself to get out of the car and face the damage. Luckily, it was not catastrophic. The stem face plate was scratched and the suspension lockout lever was broken. Back to the shop for repairs before its inaugural ride.

The second incident happened yesterday. Again, Jeff's single speed mountain bike was nicely mounted on his roof rack after leaving the shop. Jeff set off down the road. Ca-chunk, bum-bum-bumppp, crrrrkkkkk. A glance out of the side view mirror showed the bike dangling off the back of the car, held onto the bike rack by only the rear wheel. Further assessment revealed a giant dent in the car and many scratches on the side. Good one Jeff! Luckily, the bike was ok. Lesson learned: make sure the front fork thru bolt adaptor is seated correctly into the bike tray.

So while I don't look pro driving down the highway and while the back of my car is sometimes very muddy, I can say that my bikes make it safely to and from races without damage to bikes nor car nor self-respect.