I am up above 10,000 ft, 3 hours into Stage 2 of La Ruta and am cresting the top of Volcano Irazu. It is foggy, misty, windy and actually cold. I am half able to pull up my arm warmers which had been shoved down around my wrists for the climb up. I am glad I decided to put them on for the 5 am start. I don't stop at the aid station, but I notice all the volunteers bundled up in hats, gloves and warm coats. I am about to start the most fun 2 hours I have ever had in Costa Rica on my bike. And I'm not being sarcastic. We descend for 20 miles off the volcano first on gravel, then through some steep rock fields, then on smoother gravel that turns to pavement. It feels like you are flying down the mountain side, past colorful houses, lazy dogs in the street who barely turn their heads to acknowledge you are going by. The descent just keeps going and going and going. Hey dog, look at me! I am having the time of my life on Stage 2! Who would have thought that would ever be possible! By the time I cross the finish line before noon, it is hot, humid, and I am sweating up a storm walking back from the showers. But I have the biggest smile on my face.


La Ruta is not a race you go to for the incredible trails or single track riding. In fact, when the race director tells you they have added in single track sections, be worried. And be prepared to equate that with gnarly, mostly unrideable hike-a-bike. It is not the longest stage race, it is not at elevation. It is 100 degrees with 80% humidity, but there is something about the mud, the jungle, the steepness and seemingly never ending climbs, and the time spent alone with only your thoughts that makes the race much more of a challenge than it may appear on paper.


I wanted a 2nd chance at La Ruta, which is why I decided to go back this year. I wanted to tackle the beast head on. Last year, I think I survived the fight, and definitely came away with some battle wounds maybe more emotionally than physically. This year, I was ready. I had actual steep hills to train on in Roanoke and I was mentally prepared to keep myself focused on the road and hill in front of me and not think too much about the horrors that lay ahead or how slowly the kilometers were creeping by.

La Ruta is not a race you can plan for. You don't even know when the stages are going to start each day until the night before when you manage to track down a race organizer and ask. And sometimes you get 3 different answers from 3 different people. Best just show up an hour before the earliest time you were given and then spend that extra hour jockeying for a good start position at the entrance to the start corral. It's actually best to just relax, not plan for everything, and realize that somehow everything works out. Pura Vida.

The people and race atmosphere at La Ruta is incredibly special. People from the race organization actually remembered my name and would come up and give me a big hug when we arrived and ask how I've been. It was like seeing old friends. I made a new friend this year with Guillermo, the chef, who works tirelessly to feed all of the riders at the end of each stage. We actually finished at his farm at the end of stage 1. He is incredibly nice, and I want to learn Spanish just so I can impress him the next time I am in Costa Rica. Even the people you ride with, the people along the roads cheering you on, support cars for other riders offering you cold water, everyone is inclusive, encouraging and wanting to make sure that there is a smile under the suffering. It is impossible to be nervous, frustrated or upset for long when you are surrounded by such positive people.

We arrived in Costa Rica on Tuesday. Our bike boxes were lashed to the top of sprinter van and we drove through the rain from San Jose to Jaco on the Pacific Coast. It was halloween and the hotel staff were dressed accordingly. The next day we built our bikes and went for a pre-ride half way up the first climb. OMG. I thought I was going to pass out. It was so hot and humid, and I think I sweated out every sodium molecule in my body. I immediately went back to the race expo and bought preload and electrolyte tabs, which I never usually use. I began to get a little worried about the heat.

Day 1 starts from the beach at Jaco. The helicopter turns up with blades whirring and they send us off in a "neutral start" which is similar to the neutral start at Fool's Gold (ie not neutral at all). The wind from the helicopter whips across us as we head out of town. Then about 1 mile down the road, the lead car stops the entire field, and we have another "start" in the middle of the dirt road. Again, strange, but pura vida. 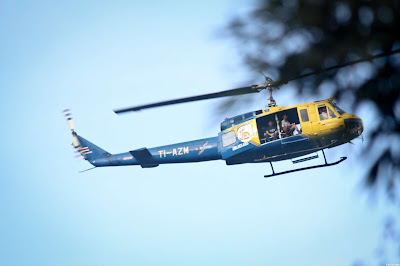 Day 1 was the longest day. It took me 8 hours and 13 mins to finish, Jeff was out for 10 hours. We climbed along gravel roads, then wound our way through the Carrara jungle and mud, then up more climbs, then along some "single track" (ie nice hiking section), then up more climbs to the finish. My rear tire went soft just before heading into Carrara. I tried adding air but it kept leaking out through the valve stem. I had to decide: ride a soft tire through the jungle or stop and put in a tube. Given my mechanical skills, I opted to tighten the valve stem as tightly as possible and ride the tire soft through the jungle. I ran through a lot of the river crossings so I wouldn't lose more air. I had very little control over the rear end of my bike which made for some sketchy descents, but I made it through, got air at the next aid station and luckily didn't have any more issues with it for the rest of the stage. 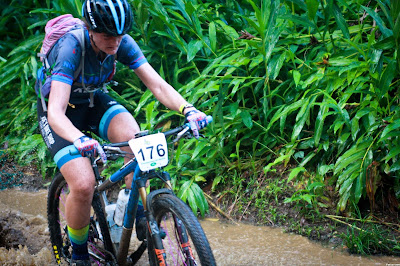 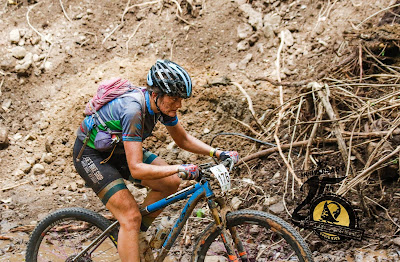 Day 2. 2:30 am breakfast, and at 3am the bus picks us up from the Holiday Inn in San Jose. We get to the start line at 3:30. We sleep on the parking lot pavement using our yellow race bags as pillows. At 5am, we cycle out of town. We climb for the next 3 hours. Up over Volcano Irazu and Turrialba. There are a few short hiking sections, but nothing like last year. We started the stage at about 4k ft, climbed to over 10k ft and then descended down to 2k ft at the finish. I wasn't even close to ending up in tears. The entire race seemed so much easier this year because of the new route on Day 2. It is by the far the most fun stage of La Ruta and maybe even one of the most fun days I have had racing my bike. 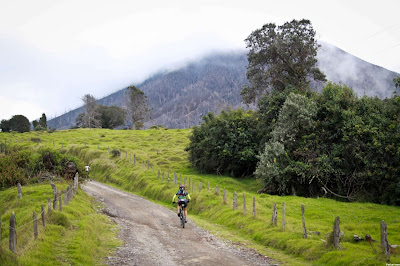 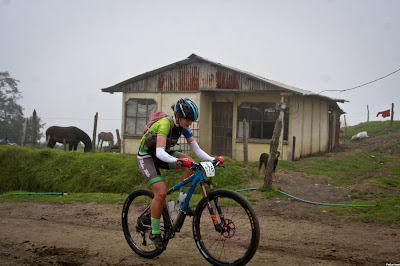 Day 3 starts out with an optional rafting section down the Pacuare river. It is a beautiful trip with lots of rapids and dense lush jungle on each side of the river where you might see the indigenous Cabecar people using ropes and a hanging basket to transport themselves across. Day 3 requires a completely opposite skill set from the 1st 2 days. It is a flat hammer fest and if don't get in with a fast group or skip across the railroad suspension bridges fast enough, you will left out to dry on your own. It also starts at 1pm. My garmin was reading 98 degrees and Jen's garmin was reading 101 degrees. It is a hot, humid 2.5 hours from Siquirres to the Caribbean ocean in Limon. After getting dropped on one of the railroad bridges, I worked really hard with another other guy who spoke only Spanish to catch back onto a group ahead. Gordon happened to be in that group and I tried my hardest to hold his wheel across the sandy beach section. I wiped out around one of the corners which is I am covered in sand and mud at the end. I managed to catch back up to him and he definitely helped pull me to the finish! I finished 2nd on every stage this year and 2nd overall in the elite women. Jen finished 3rd overall, and it was pretty awesome to share the podium with her.

It's hard to describe the feeling of seeing the Atlantic ocean. It means you finished La Ruta, you don't have to wake up at ungodly hours, there is no more mud, and for most of us in the NUE/OMBC group, it means the end of a long endurance season that started sometime back in Feb or March. You can float in the waves, close your eyes, wash away the mud, and just let go of everything. After day 1, Jeff said he would never be coming back to La Ruta. While we were swimming in the Caribbean, he had already changed his mind and said he would do it again. Pura Vida!

Much thanks to all of my sponsors this season: Joe's Bike Shop, Maxxis Tires, ESI grips, Huma Gel, and Ridge Supply Socks. I really couldn't have had so much success without all of their support! 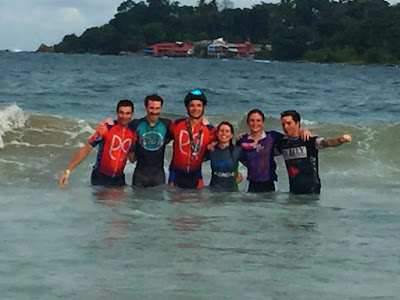