Notes from the road: Part 1

Day 1: Finished the last of the packing. Everything in our house is completely boxed up. Packed up the cars with supplies for the next month, the dogs and 6 bikes. Headed north towards Baltimore. Stopped in DC to eat burritos and see my brother.

Day 2: Took the bikes into Joe's for some minor repairs before Hilly Billy. After a week of hemming and hawing, I finally decided to ride my hardtail with the lauf fork and low tread Maxxis pace tires. Drove out to Morgantown, WV through the pouring rain. Met Chris and Dave Holland for dinner.

Day 3: Raced Hilly Billy Roubaix. Fun course with a little bit of everything - road, gravel, mud, deep potholes, steep climbs, flat hammer sections. Hardtail was great choice! Jeff ended up catching up to me mid race which was cool because I haven't had the chance to ride with him in a race for a long time. We pulled into aid station 3 together. Quick water bottle fill up and back out on the road. Jeff likes to spend a bit more time at aid stations. I told him to get going. He had a pickle in his mouth and a banana half in his hand. He stuffed the banana in his mouth too and started pedaling. Pickle banana is now his new favorite aid station snack. I ended up winning in a very competitive women's field! Drove back to Baltimore. 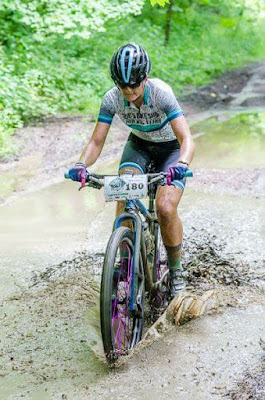 Day 4: Raced at 6hrs of Woodstock which Jen Tillman and Joe's Bike shop put on. A great local race. Jeff and I raced as a team in the co-ed category. I think everyone knows how I feel about co-ed racing! The trails were super fun, punchy climbs, some rocks. Enjoyed dinner and beers with teammates at the Woodstock Inn afterwards. 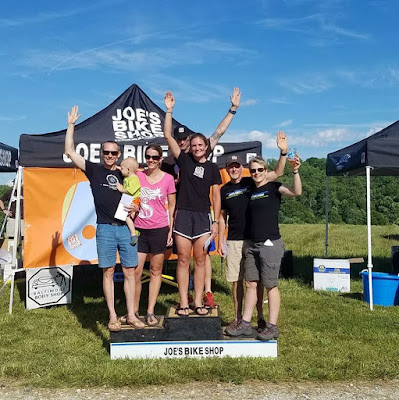 Day 5: Woke up early and started driving west. I took Jeff's van, packed with camping gear, hiking gear, biking gear and 2 FS bikes - one for me and one for Jeff when he joins me in Portland. Made it Chicago today. Biked along the waterfront trail and enjoyed some of the Chicago sights. Camped at Bullfrog Lake. Campfire skills need serious work. 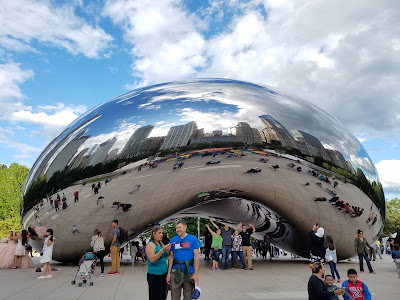 Day 6: Road around the trails at Palos trail system. MTB project is a great resource for finding gpx files for fun rides when you are traveling. Continued driving west. Stopped at a cool and ancient bike shop in Fairmont, MN that was a mix of bike stuff, antique toy cars and band stuff. I forgot a CO2 inflator head which is why I stopped. I talked to the owner for about an hour about biking and brass bands. Made it to Spearfish, SD. Stayed at a KOA site there. 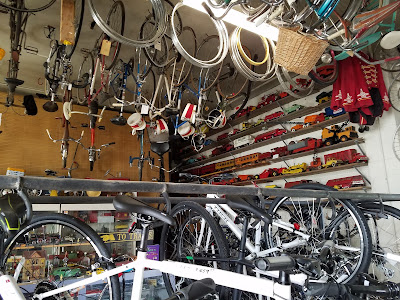 Day 7: Biked 50 miles of singletrack on the Dakota five-O course in the Black Hills, another ride which I found on MTB project. Beautiful course, lots of white birch stands, rugged rocky trails, open fields. Chased some cattle down the trail. Jeff and I raced Tatanka 100 last year, which was an awesome race and it was very cool to return to the Black Hills. Went to Devil's Tower and hiked all the trails there. Saw prairie dogs which were cute! Drove to Greystone, WY, up and over the Bighorn mountains. Saw elk and a moose just as the sun was setting. Camped at KOA there. 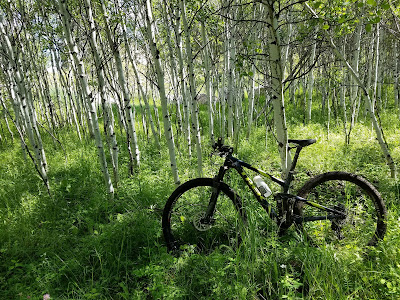 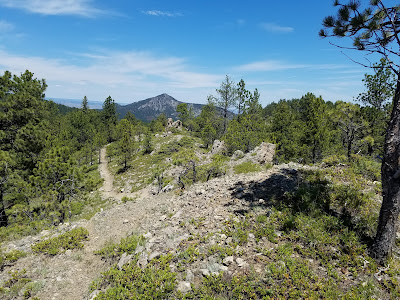 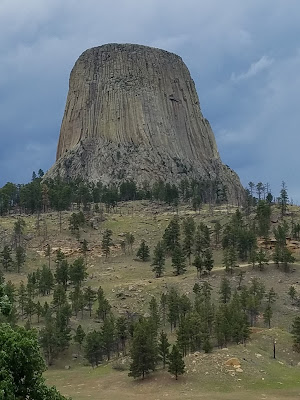 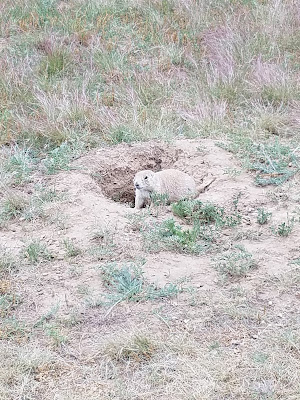 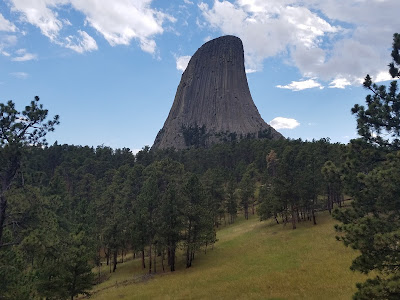 Day 8: Decided it was time for a new shirt. Drove to Yellowstone. Saw a bear come out of a stream and jump over the guard rail right in front of me on the drive in. Then saw 2 grizzlies on the shores of Lake Yellowstone. 3 bears before 9am! Saw the thermal areas at Mud Volcano. The waters were churning. Saw elk and bison. Spent most of the day in the Grand Canyon of Yellowstone. Hiked the South Rim trail to Uncle Tom’s trail to see the lower falls. Hiked out to Ribbon Lake, Clear lake, Point Sublime. Hiking off the main tourist trails has the added benefit of being able to pop a squat in the woods and avoid the bathroom lines. Biked from the end of Chittenden Road up to the top of Mount Washburn. The top was buried in clouds but did see bighorn sheep on the way down. Ended the day at Mammoth Falls. 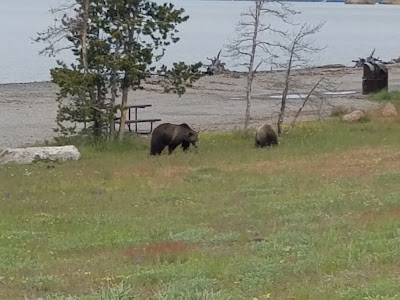 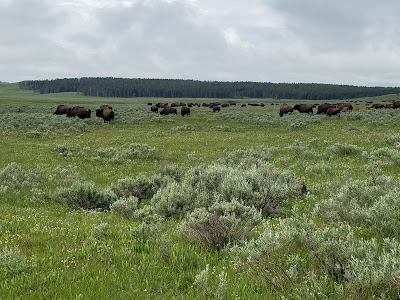 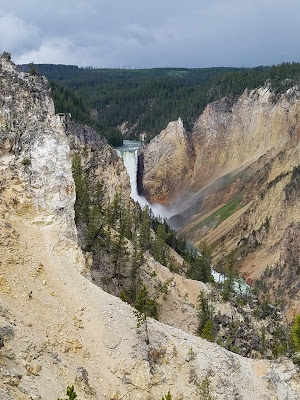 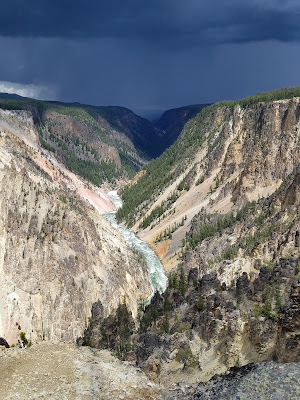 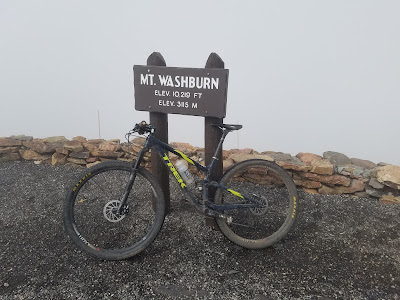 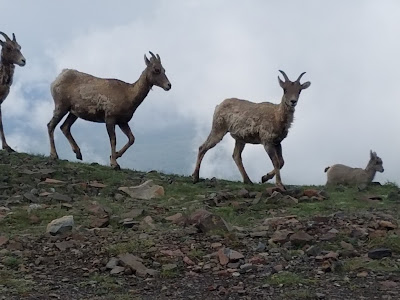 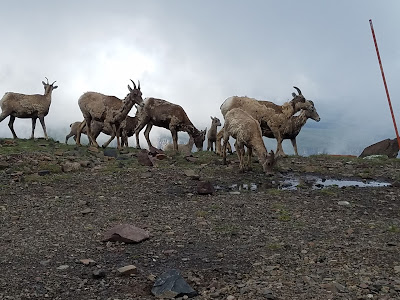 Day 9: Spent the morning at Norris Geyser Basin. Very foggy. Cool geysers – one called Vixen was like a person with too much bottled up anger and then finally explodes. Some of the geysers almost seem to be alive and breathing. Stopped at a lot of boardwalks on the way to Old Faithful to see the geyser fields: Artist’s paintpots, Fountain paintpots, Midway gyser basin, Biscuit basin, Black Sand basin. Amazing colors and variety. Lots of people on the boardwalks. Just missed Artemsia geyser erupting. Talked to a geyser gaszer there: yes, there is a whole group of people who sit watching and waiting for geysers to go off. Navigated and endured the crowds at Old Faithful. Biked out to Lonestar geyser but again, just missed it erupting. Saw a baby buffalo and elk. Tried to take a picture at the Yellowstone entrance sign. Got attacked by mosquitoes. Spent the rest of the drive thru Grand Teton park trying to kill all the ones that flew into the car. Serves me right for taking a stupid tourist photo. Ate pizza in Jackson Hole. Made it to Driggs, ID. Staying at a dorm style air bnb for the next few nights. Dreamt of geysers. 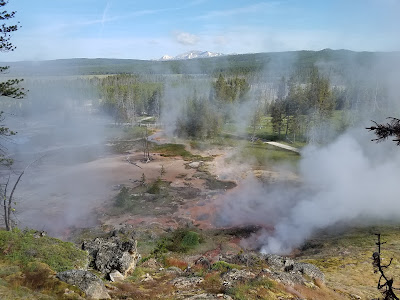 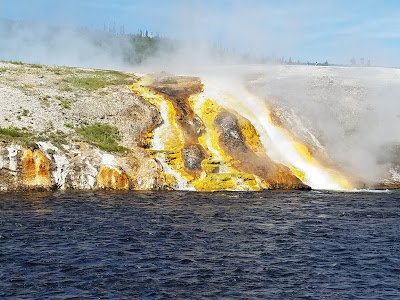 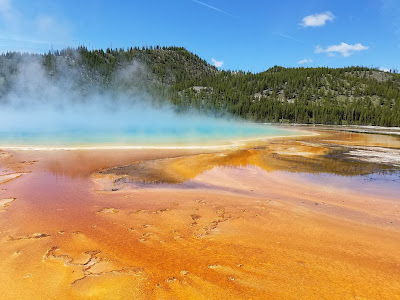 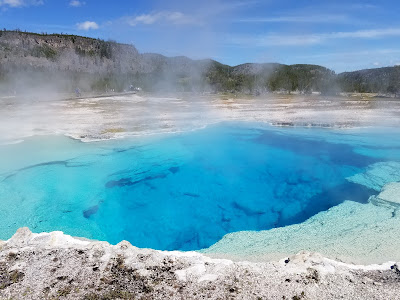 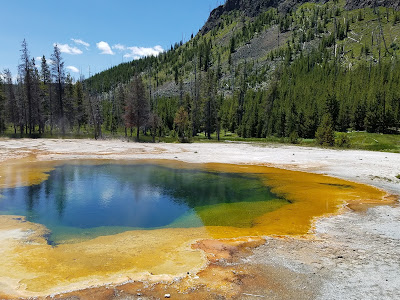 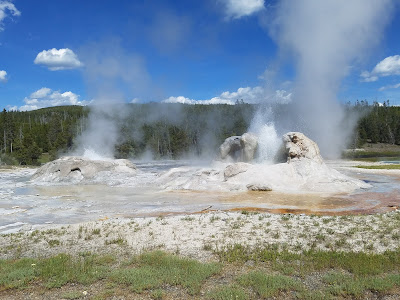 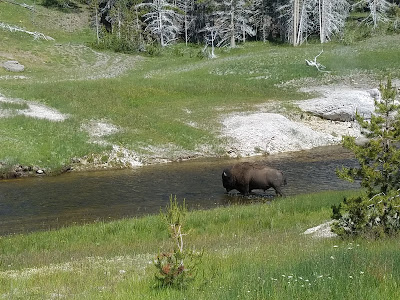