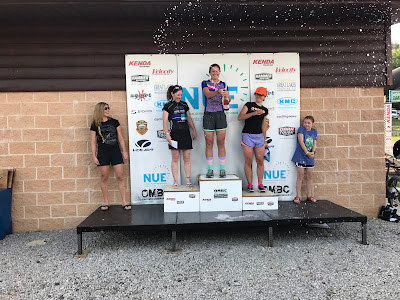 We had a pretty perfect weekend up in Ohio. The weather was warm and sunny, we remembered to pack everything except the carborocket and there was only 1 annoying camp party who kept everyone awake until 2am yelling and playing beer pong.

I raced Mohican once before 3 years ago and there were certain parts of the course that I remembered. The long singletrack section at the start, Aid station 3 in the barn, climbing up a grassy hill into the woods right after Aid 3, the 10 mile mind-numbing rail trail section around mile 65. There were also a lot of really steep climbs in the second half of the race that I had somehow managed to completely forget about.

My race went really well. I have finally found my 100 mile racing legs and instead of flying and dying like I did at Cohutta, I felt like I was able to fly for the entire race. The start at Mohican is always chaotic. There are about 700 races in the 100 mile and 100k race starting at the same time down main street in Loudonville, OH. I saw 1 horrible crash in the first ½ mile that took out at least 2 racers on the asphalt. Then we hit the first hill and things started to spread out a little bit. I got into a good position leading the women’s field right before we entered the 1st singletrack section. It was so fun! The first 30ish mils are all singletrack riding through really flowy, fast trails. I had my full suspension bike with ESI grips and Maxxis Ikon tires and was just rolling through the trails behind a fast group of men.

After the singletrack section, there were some dirt roads, steep punchy climbs, some more rocky singletrack sections before hitting Aid 3 at about 50 miles into the race. I was still feeling great and just focused on hammering all the road sections as much as I could and never sitting behind riders I caught up to for too long. My goal was to try and hit the rail trail section with some other geared riders so we could alternate pulls on the flat, boring, mentally draining section. Unfortunately, I ended up hitting the trail with no one in sight except for a singlespeeder, Matt. Useless! I put my head down and started plugging away with Matt drafting behind me. About half way through, I saw another rider ahead. “Great,” I thought. “Someone to share the work with.” I put in a bit more effort to catch up. It turned out be another useless singlespeeder :-)

After Aid 4 around mile 73, there were quite a few more steep climbs and singletrack sections. Matt helped out and set the pace up a lot of the climbs and it was nice to have someone to keep up with because my legs were starting to feel a little tired. We joined up with another geared rider and rolled right through Aid 5, into the last 5-6 miles of singletrack before the finish. About midway through the singletrack section, I figured there was a chance I might be able to break 8 hours. I decided to go for it and put in one last hard effort to the finish, passing a bunch of 100k riders and finishing in 7:56, 1st place for the women’s field! Jeff did the 100K race on his singlespeed, and he was there at the finish to cheer me in.


I think there were a couple of things that made this race a lot better for me. The first was a workout my coach, Chris Beck, made me do last weekend. It was 4x45 minute intervals with 15 minutes rest. It was like doing 4 time trials in a row. It was hard, but it definitely gave me the confidence to keep the pace fast for the entire race without fear that I would blow up. I also brought music this time, which I don’t usually race with. I think it kept me more upbeat and I could more easily ignore how hard I was breathing/working. Lastly, Jeff and I watched some of the UCI World Cup MTB races on Redbull TV. It was pretty inspiring to see the women there racing their hearts out and anytime I started to think about backing off the pace, I kept telling myself that none of those women would slow down and that motivated me to keep going.

It was really fun catching up with all our NUE friends. Congrats to everyone else who raced. Linda and Jenn finished 1st and 2nd in the 100k race, John got 1st and Chris finished 7th in the 100m SS race, Jeff got 9th in the 100k SS race, and Janis did an awesome job and finished the 100k before I finished 100 miles, which he is very proud of!

I think it’s awesome that there were some many new and competitive racers in the women’s field this year. It’s also awesome that there was equal payout for the men’s and women’s champions, which is such a positive change from years prior. I still think there should be equal payout for all female podium finishers and that will only help to increase the size and talent in the women’s field.

Thanks so much to Ryan for organizing the race, all the volunteers at the aid stations (having pitchers of water made filling camel packs so much easier and faster!), to Back Alley Bikes for getting my bike completely repaired after I destroyed it at Pisgah, to ESI grips, Maxxis Tires, Ridge Supply Socks, Joe’s Bike Shop Racing Team, and my coach, Chris Beck, who gives me sometimes impossible workouts but never stops challenging me to get faster and stronger.
Posted by Carla at 8:18 AM