I feel super lucky to be able to do this race and to share the entire experience with Jeff. The pictures that I saw from this race last year looked incredible, fun singletrack, big pine trees, huge mountains. Definitely a bucket list item. I owe an incredible thanks to Kathy, who gave me her entry for this race, and I wouldn't be here without her help.

The 2 things I was most nervous about was #1 the altitude and how it would affect me and #2 getting caught on a mountain pass when a storm rolls through and freezing to death. So far, #2 hasn't happened and #1, well, I am dealing with it!

The race vibe is pretty awesome. There seems to be a lot of local support for the race, which is cool to see. There are only 3 rules, which mainly boil down to be a good person and a good steward for the sport, and Mike, the race director, seems super friendly and is really excited to share the trails around Breckenridge with all of us racers.

We are staying an Beaver Run, which is where the race headquarters are, and I would highly recommend. From the resort, it is a downhill ride into town for the race starts, you can walk to the morning bag drop and nightly race meeting, and there is a free shuttle into town as needed for dinners. Also hot tubs, and we have a full kitchen to keep up with healthy eating! 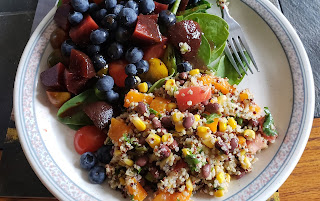 The race start was delayed due to storms rolling through in the morning. Instead of starting at 8:30, we started at 10:30 and instead of a mass start, we started in waves based on our category. The course was also shortened due to the weather conditions, so instead of 32 miles, it was only 17. I was a little bummed about not getting to ride the full race route, but I've also learned that in stage races you have to just roll with the punches, so I grabbed a couple hours of extra sleep and got psyched to finally start racing. I started in wave 2, which included pro women and 40+ cat 1 men, and Jeff started right behind me in wave 3. There was short road climb, and then we immediately ducked into the trails. There was some rolling singletrack, some forest roads that we climbed and descended and climbed again, and then a pretty fun singletrack descent down to the finish. 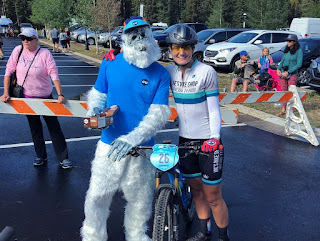 As expected, my lungs were absolutely burning the entire race. I had a cx cough by the end, but I kept pushing as much as my lungs would allow me to and ended up getting second in women's pro category, which was definitely unexpected. I waited at the finish for Jeff, who unfortunately frayed his shifter cable and got stuck in 34x10 and had to hike a bunch of the uphills. There was about a 5 mile descent back into town which we rode together and then started recovering, washing and fixing bikes, eating and getting prepped for stage 2.

The real racing started today. 41 miles, 6500 ft of climbing, mass start in downtown Breck. We immediately started climbing up a paved road that turned to gravel and then hit a fun narrow singletrack that wound down the side of a mountain. After a short gravel road descent, we spent the next several miles traversing a narrow spine through the woods with little sharp rocks and roots littering the trail. Then we hit the Colorado trail, which was awesome. It took us through big pine trees and we climbed it up to 11,200 ft and then descended off of it down to ~9000 ft. The views on the descent were incredible, through alpine meadows with beautiful open vistas of the mountains in the distance. After the descent, we hit some sandy, dusty trails and had 3 more 2-3 mile climbs and fun bermy descents back to the finish.


It was amazing singletrack today, I only wish I felt better riding it. My breathing was better probably because I was going slower, and I felt like I had absolutely no power in the legs. Ah altitude! I did the best with what my legs gave me, and very excited to still be in 2nd place! Jeff had no comments about his experience today (lets just say he suffered a lot out there) but he finished and is feeling better after a burger this evening!