I might have failed at my goal of trying all new races in 2018, but when the stars all align easily and I can take a trip to Bend, it's impossible to say no. Besides, since the High Cascades 100 course changes every year, technically I did race a new course, so maybe my 2018 MTB goal isn't completely kaput.

I just happened to have 5 days off of work around this race, and Jeff had already decided to take a summer road trip out west so it was relatively simple to book a flight and meet Jeff in Portland, who had my bike already fully assembled in the van. We drove immediately from PDX to the Sandy Ridge trails which are conveniently located just off the main road to Bend. We had a great time climbing up to the ridge and then snaking down a combination of trails through old growth Pacific northwest forest, past towering pines, huge ferns, and moss covered rocks.

Jeff and I are really excited to be joining and racing for the Deschutes cyclocross team out of Roanoke this year. Rob, one of our teammates from Roanoke, also flew out for High Cascades, and we met Jodan, Matt, Craig, and Michelle (all from Bend who also race for Deschutes) for a ride up a trail called North Fork and then descended down a trail called Farewell. It was a really fun ride, we took lots of pictures, passed lots of waterfalls, and finished with beers in the parking lot and then more beers and dinner at the Deschutes Brewery. I am really excited for more team fun this coming fall.

The race was on Saturday, so I had a couple of free days to squeeze in some extra riding around Newberry Crater and some paddleboarding on Devils Lake and Elk Lake, which was scenic and fun!

The race started at 5:30 am on Saturday morning, which is quite early. And also quite cold. The temperature was reading 44 degrees on our way to the start line. Because Bend is in the desert, it gets really hot during the day and then pretty cold at night. I knew that Larissa Connors was registered for the race, so I figured that I would be racing for 2nd place since she is way faster than me, and so that is what I set out to do.

There is a fairly long neutral roll out at the start along the highway that leads to the trails. The first turn off of the main road takes you immediately onto a dirt road for the first of many climbs and the racing starts. The dirt road this year was not really dirt but deep sand and it took awhile maneuvering past squirrely bikes to get into a good position on the climb for the 1st singletrack section.

I've been struggling the last couple of weeks with mid season physical fatigue and also just mental burnout from constantly trying to keep up with work and with training. There have been a lot of tears and questioning what exactly I am trying to accomplish on the bike. Since I still don't have those answers, I decided to simply focus inward for this race. I decided to be happy that I was feeling strong again after some rest days last week, that I was capable of riding 100 miles on my mountain bike and that I was lucky enough to be able to ride in an amazing place with incredible scenery. Not exactly race mode mentality, but I did have a smile on my face for the entire day!

After the 1st climb, there is a really fun descent on a trail called Tiddlywinks, which has fun rollers and tabletops and berms. With all the dust kicked up from racers in front and the morning sun squinting through the trees, it was nearly impossible to see the trail and I basically pointed my bike down and hoped for the best. 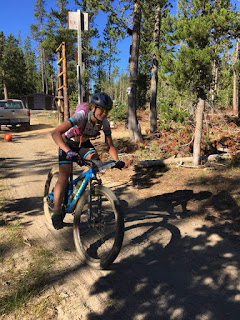 I stopped at aid 3 at mile 50 to fill up on water and then started up this incredible climb that slowly wound us up a mountain away from the sandy desert trails and onto real soil, past alpine meadows, and we even passed pockets of snow that hadn't melted yet. It was definitely my favorite part of the course.

I made friends with Eric on the way up the climb and followed his wheel on the descent back down to sandy fire roads and singletrack with some punchy steep climbs thrown in for good measure. I stopped again at mile 82 for more water. Dan Atkins, who I know from Baltimore, and I played leapfrog on the last part of the course, he would pass me on the descents and I would catch back up on the climbs. The last 18 miles had more descents then climbs, and I couldn't quite catch back up on the 5 mile road section back to the finishing line, and ended up finishing right behind him. It was a great day to be out on the bike, and I managed a 2nd place finish in the women's open field.


The race director, Mike, is one of the nicest people and puts on an incredible event. There are lots of pre-race emails that answer every possible question you could have, the course is super well marked and almost all singletrack, the aid stations are great, the volunteers are super nice, and there is Deschutes beer at the finish! It is a really quality race, and I would highly recommend this race to anyone thinking about going next year.

Brian had a great race and took the overall win setting a new course record which was pretty amazing, Jeff improved on his time from last year, and Rob also finished and had a fun time too. We capped off the day with a float down the Deschutes River and a pizza picnic in the park with Heidi and Jeff. It was a great trip with awesome friends, new and old. Thanks so much to Deschutes Brewery, to Joe's Bike Shop, East Coasters Bike Shop, to Maxxis Tires, ESI grips, Huma gels, Rudy Project, and XX2i optics. Last year, I did not wear sunglasses and so much dust got into my eyes that I had blurry vision for the last 15-20 miles of the course and it took several hours and a bottle of eye drops before my vision was normal again. No vision issues with XX2i optics this year!