There is so much I want to write about this event both generally and personally. I am going to try to keep it brief, hopefully I don't get too carried away!

First, generally: Epic Rides put on an incredible event. They really make you feel like a pro rider from the payouts to the fact they have a dedicated liaison to answer any possible question you have about the race or about Prescott in general. You know a series is going somewhere when the race director wants to compete directly with the UCI XCO races. When asked about conflicts with the UCI mtb racing calendar, the director answered "I want to double the current prize money so it will be a no-brainer which race to go to." Say what? It's also cool that there is and has always been equal payout for men and women at all races in the series. The result: an incredibly deep and talented women's field showed up for the race which was exciting and pretty intimidating at the same time.


The race takes place in Prescott, AZ. The entire downtown square is closed off to traffic and the streets are lined with vendors, racers, cheering fans, a huge stage for music and podiums, people dressed in old western attire shooting off guns to start every race. It was a really fun atmosphere. With the fat tire crit on Fri, amateur races Sat, and Pro races Sun, it was a full weekend of pre-riding, warming up, racing, cheering, more pre-riding, more racing and constantly wiping off dust from everything!

Second, personally: the weekend definitely had its ups and downs for me. Friday morning Jeff and I pre-rode some trails. I came around a corner too fast, my front tire hit some sand, my bike got all wobbly and I ended up over the handle bars into some bushes. Definitely not a huge confidence booster but I made a mental note to watch out for that on Sunday. And if I didn't have some blood on my knee, I don't think I would feel normal :-)

Friday evening was the fat tire crit. It consisted of a very short lap with a steep hill, steep descent, sharp turns and what felt like no place to recover. My lungs and legs were on fire. I lost the lead group right away but kept pushing as hard as I could and ended up finishing 9th place, which was super exciting and a great result for me. Then I proceeded to cough up and blow out my nose an incredible amount of mucus and snot and could hardly breath. I sat on the curb coughing and wheezing my lungs out.

Saturday was Jeff's race and I cheered as he set off and then again when he came back to the finish. He gave me a run down of the course afterwards: climb out of town, techy singletrack climbing and descending, climb on some chunky double track to aid 1, dirt road descent into Skull Valley then climb back out, then some more single track, then a steep hill called cramp hill, then the singletrack section we pre-rode the day before, then road back into town.


Sunday was race day. They called up the top 10 from Friday's crit which meant I got to line up right behind Annika Langvad, Kate Coutney, Erin Buck and Chloe Woodruff. Woah. 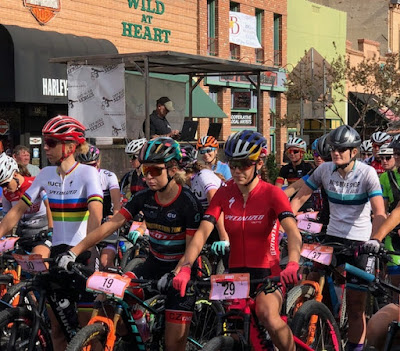 I had a good start and I thought I would get passed by a lot of people in the 1st singletrack section b/c I knew there were many better technical riders than me who would be way smoother over the rocks and waterbars. Amazingly, I think only 3 people passed me. I was breathing super hard but also felt pretty good heading into the climb up to aid 1 and kept pushing the pace on the descent into Skull Valley. I was able to catch up to a couple more riders and was looking forward to the long climb out because I felt that would be one of my strengths. Unfortunately, I just never really found my legs on the climb. I don't know if it was the altitude or maybe I went out too fast at the start. I just couldn't make my legs pedal any faster.

The thing about a 50 mile race in a stacked field is that you can't ever let up. The moment you become complacent is the moment you are no longer in the top 10 or top 15 or top 20. There is always someone right behind you (and also right in front of you if you have the fitness and willpower to catch them). Time margins are close and things never spread out like they usually do in NUE races. 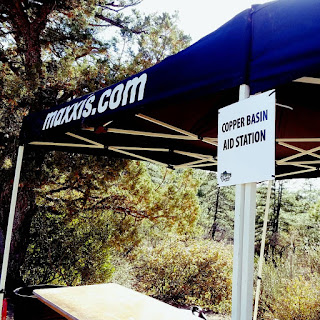 I finished the race 13th. I was initially disappointed. I would have been so happy with a top 10 result. Looking at the field before the race, I knew that was probably an unrealistic goal but, if I had the race of my life, I thought I might be able to do it. I raced a solid race and was satisfied with my effort. It just wasn't the race of my life, and I felt a little let down.


There is a constant struggle btw wanting to do more on the bike but then also reminding myself that I am full time ED physician and biking is something I do on the side. I know that I have more speed and fitness inside, and that I can do better. But then I also realize I'm not a pro who can train full time. Part of me wants so much to find that next level to really compete with the best and the other part says I should be happy where I am considering all the other demands and crazy life in the ED. It's not always easy to reconcile those conflicting sentiments, but I trust my coach and the the process of training and maybe one day, I'll have that race of my life. So back to training and intervals and (hopefully) will make it to MTB nats this weekend. 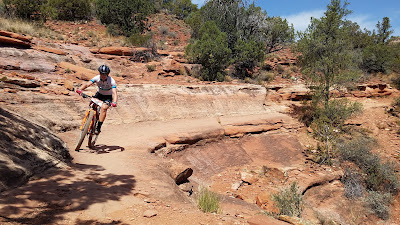