After this weekend, I can cross one off my bucket list: to do a race in Pisgah. It has been my goal to race in Pisgah ever since moving to North Carolina. Jeff and I have never had fun biking the singletrack in there. Roots, rocks, overgrown trails, hike-a-bikes, getting terribly lost because we always try to figure out routes without bringing maps, 4 hour planned rides that end up taking 7. That has been our experience with the Pisgah singletrack the 2 times we have tried to ride there. But for some reason in my mind, doing a race in Pisgah means you are a real mountain biker with real technical riding skills, which is what I have been working hard on over the last couple of years. I wanted to put those skills to the test. I had no idea what to expect. The trails listed on the cue sheets (Laurel Mountain, Pilot Rock, Black Mountain) had no meaning to me.


We started up the dirt road climb behind the horse stables. I was feeling good, nervous about what the day held, excited to be actually racing in Pisgah! The weekend for me was not about racing other people. It was about riding my pace, staying within my head, not getting wigged out on the super steep rocky downhills, and keeping something in reserve since I had no idea what Pisgah would serve up for me around the next corner.

The race was actually going incredibly well. I made it through a bunch of singletrack to Aid 1 without too much difficulty and it seemed like no time passed at all before I was at Aid 2 at the top of a fire road climb up 5015. After that, there was some more fire road and we hit Spencer's Gap trail, which definitely made it onto my list of top 10 favorite trails to ride. I hit Aid 3 around 50 miles and was still feeling good. 50 miles into a Pisgah race, and I wasn't yet having death wishes. Ah, how naive I was.

The last 20 miles is probably the hardest 20 miles of singletrack riding I have ever done. Laurel Mountain trail is ok. There are some really tricky rocky sections that I had to walk over and the roots always seemed to want to slide me off the trail and down the mountain side, but I managed those fine. Then there is a long hike-a-bike section to the top of Pilot Rock. The descent off Pilot Rock was super challenging. Steep, huge rocks in all the switchbacks, gullies to navigate through. Ugh. To make matters worse, my lock out had stopped working somewhere along the way, so I had a rigid frame to navigate down the mountain. If anyone from the bike industry is reading this, you should really reverse engineer lockouts so that if the lock out breaks, your suspension is full squish instead of fully locked out. 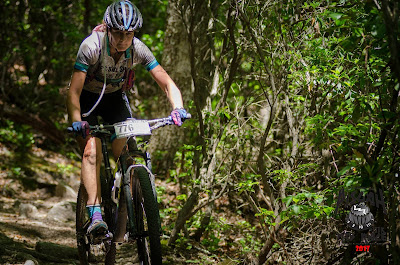 I made to aid station 4. There was something like 8 or 9 miles to go. Woo! No problem. Climbed up Buckhorn Gap trail which was a gradual, fun, fast climb. 5 or so miles. OMG. Those last 5 miles were THE WORST. At least 4 long hike-a-bike sections, super steep, slick rocks. I was definitely not expecting that. Blisters on both feet made each step painful. I started losing it and cursing the forest. It felt like La Ruta, although I kept telling myself nothing was ever going to be as bad as La Ruta. And it wasn't. I hit the descent, walked down a few really sketchy sections up high with big drops, and then flew down the lower part of Black Mountain which was so so fun! And then the finish line was right there! 8 hours and 45 mins. It was a long day, but first race in Pisgah was done, and I was still in one piece!