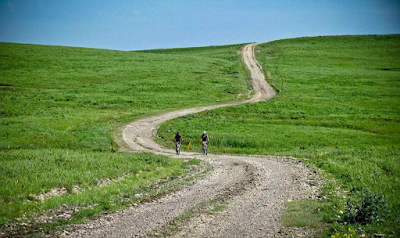 5 days finished, back to work in the emergency department and I still can't stop thinking about the race. My body is wrecked. I wake up tired every morning wishing I had 5 more hours to sleep. My legs still feel like jelly when I get on my bike to ride. But all I can think about are those white gravel roads, green prairie grasses waving in the wind and the bright blue Kansas skies. How soon until we can go back?

The Flint Hills are a truly unique place, a place I would have never experienced if it hadn't been for this race. "Kansas?" everyone said when I told them about my vacation plans. Even as we were driving out to Emporia from the airport, we joked that the largest hill we saw was man-made on a golf course.

Getting prepped for the race took almost as much energy as the race itself. What would happen out there? How many flats would we get? What would my stomach feel like eating? I had read stories online of people getting 6 flat tires in a row, converting their bikes to single speeds after a derailleur break, having to be rescued by their support crew. The race instructions are very clear: this is a self-supported race in a remote and rugged environment with minimal aid. My only goal was to finish the race, and I wanted to make sure I had the tools to be able to do that. It took multiple trips to multiple bike shops and in the end, I barely used anything I had brought. For anyone considering the race, this is what I packed with me: 3 tubes, 3 CO2s and inflator head, tire lever, chain lube, multi tool and chain breaker, 2 quick links, tube patch kit, 3 tire boots, external battery and cord to charge my garmin, credit card. I had 6 additional tubes and CO2s out on the course at aid stations and 1 spare tire. 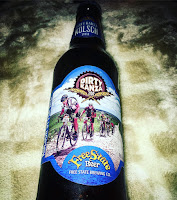 We flew into Kansas City, MO, rented a minivan, met up with Ethan, one of our friends from Joe's who now works for Salsa, and set off for Emporia. The next 2 days were spent preparing for the race: re-assembling bikes which luckily made it through unscathed (thanks to overkill bubble wrap), prepping drop bags, going to the rider's meeting, making playlists, pre-riding the gravel, adjusting tire pressure, charging garmins and lights, eating, hydrating, wondering what we were about to start in less than 48 hours. We were lucky enough to stay with a wonderful, kind, and incredibly generous host, Grace, who we met through air bnb. She lived less than 1 mile from the course start and went out of her way to make sure we had everything we needed for a successful race. She even had official DK kolsch on hand for us!


The morning of the race, we were up at 4:45am, out to the start line by 5:30, and rolling out of Emporia at 6. There is a neutral rollout led by last year's champions and the town's law enforcement vehicles. The race was on.


Unfortunately, what had been dry and dusty gravel the day before during our pre-ride had turned into thick clay mud and standing puddles of water with overnight thunderstorms. Immediately our bikes and bodies were covered in mud. I was charging through the puddles and mud bogs still feeling excited and fresh. I started feeling my chain skipping across the front chain ring. Skip, skip, skip, grind, and then it fell off. Fuck.


I pulled off to the side of the road. I put the chain back on, spun my pedals once around with my hand, and off the chain fell onto the outside of my chain ring. Panic set in. I couldn't get my chain to stay on the gears. I watched almost the entire field of riders pass me by. All that travel, all the planning and now I was here, sidelined, less than 5 miles from the start. In that moment all of my goals and plans for the race disappeared. All I cared about was getting back on my bike and pedaling again. How was I going to make that happen?

2 guys had pulled off next to me with similar shifting issues. One told me to clean as much mud off my bike as possible. Done. After more tinkering, the other guy somehow got my chain to stick in a single gear. Omg. I was going to be able to pedal. Thank you, thank you, thank you. I cannot thank you enough. I was off. I didn't care I had only 1 gear. I was back on the road and working towards aid station 1. After a few miles of dry road, I dared to shift and found that I had 3 working gears. One for the flats, 2 for the hills. All plans about conserving energy for the first 50 miles went to abandon. My only thought was going as hard and as fast as I could to work my way back up through the field. If someone passed me going faster, I caught their wheel and stayed with them until someone faster passed us and I was off at a faster pace with them. I pulled up to Ted, another member of the Joe's Bike Shop team, and he burned a match to give me pull. I really can't thank him enough for that. Just before aid station 1 at the 48 mile mark, I caught up to Jeff on his pink mountain bike. Making progress. I felt good.

At aid station 1, I restocked on water and got my shifting fixed. Still not perfect, but I had more than 3 gears and was psyched about that. Now I could more comfortably spin up the hills. I caught Ethan around mile 50. All I could think was push, push, push. I would pass people who told me I still had a long day ahead but I didn't listen. I just kept pushing those pedals down. 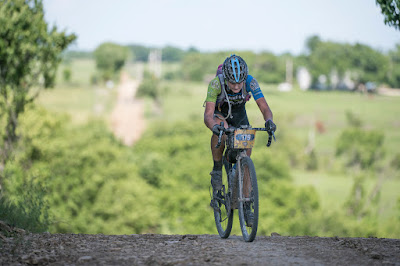 Around mile 90, a peloton of riders came charging by including Kris Auer, who I used to ride with Baltimore, and Amanda Neuman, last year's winner. They definitely caught me by surprise because I thought they would be way ahead of me. I found out later Kris had gotten lost and Amanda had been held up with a flat tire. We pulled into aid station 2 together. That was the first time I found out I was in second place.

I spent too much time at aid station 2. I was feeling a bit tired by the effort of the first 100 miles. It was also hot. I had to pee and there were no bathrooms. The cold mountain dew never tasted so good. I finally pulled out of Eureka by myself. I did a double take about a mile up the road when Tim Johnson and Yuri Hauswald (last year’s overall winner) rode past me. “Aren’t you guys supposed to be up with leaders?” I asked. They probably didn’t appreciate my question very much. A little while later, I saw Yuri pulled over on the side of the road with a flat tire. A little while after that, I caught back up to Tim Johnson and a few other people he was riding with. That was definitely a highlight of the race for me. I was riding in the Dirty Kanza with Tim Johnson! Then a little while after that, I pulled away from Tim Johnson and kept pushing towards aid station 3. That was also a highlight. 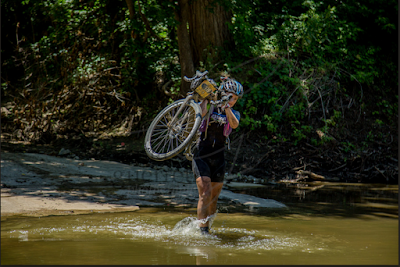 Getting to aid station 3 was the hardest part of the race. We were headed north about 63 miles from Eureka back to Madison, and there was an unrelenting headwind the entire way there. Each rolling hill seemed longer than the next, the wind was blowing us backwards, and the sun was baking us overhead. There were no trees, no long downhills, no recovery, no escape from the elements. Progress was frustratingly slow.

Ethan met me at aid 3. His frame had cracked on one of the downhills. I felt bad he couldn’t finish the race, but he seemed in good spirits and assured me he would be back next year. He helped me load back up on water and perpetuem. I didn’t stay long at aid 3. I knew I probably wouldn’t get going again if I did. My body had never felt so tired before.

I was back out crunching gravel under my tires. I crested a hill. Below me, all I could see for miles around was green pastures dotted with brown cattle and above a blue sky dotted with white clouds. It was beautiful, isolating, the grasses and shadows constantly shifting with the winds yet seemingly unchanging and monotonous after 180 miles. I was an inconsequential speck to the vastness of this land.

Rolling into Emporia was the most incredible experience. Suddenly, life mattered again. A huge crowd was cheering for me. I crossed the finish line, 206 miles, 13 hours 28 minutes. No more gravel, no more wind, no more mud. I wanted to start crying but all I seemed able to do was smile. I didn’t know anyone at the finish line. Volunteers from the town were giving me hugs. I was so grateful for that. I wanted to remember how it had felt out there, how hard it had been, those dark places I had pushed through, but I couldn’t. All I could think about was that feeling of rolling into Emporia and crossing that finish line and what an incredible sense of happiness, relief and accomplishment I felt. 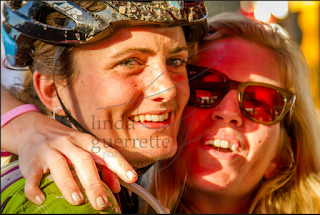 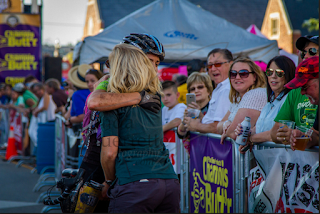 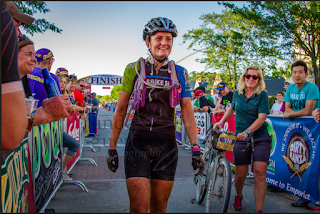 Jeff finished just under 15 hours. We biked our exhausted bodies back to Grace’s house, showered and passed out. Jeff drank my celebratory beer because I was too tired. Everyone we talked to after the race wanted to know if we were planning to come back. “Maybe,” I said. “Definitely not,” Jeff said. “One and done” was his mantra. It took a little longer for Jeff to realize, but by day 2, he was already thinking about how he could improve his time, his bike and his fitness for next year. We’ll be back Kansas. Those striking, austere, dusty, unforgiving, awful, beautiful gravel roads are calling. 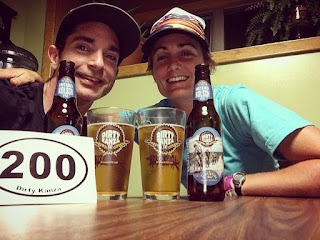 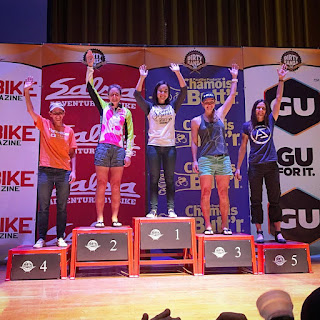